Counting your Chickens is a Quest in Divinity: Original Sin II. 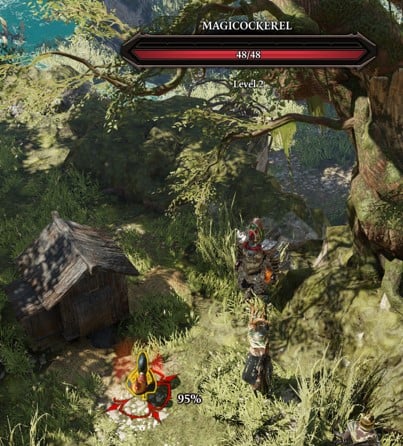 At the beginning of Reaper's Coast, just before you enter Driftwood, you will find some chickens on a ranch. If you have the Pet Pal talent, you will learn that their eggs have been stolen. Big Marge, the leader of these chickens, will task you with finding these stolen eggs.

Travel to the place marked on your map north of the hens, and defeat the Voidwoken there. Unfortunately, you will discover that all the eggs have been tainted and there is only one surviving egg left. Pick it up and take it back to Big Marge.

Secret: If you eat the egg now and report back to Big Marge, the quest will close with the same experience reward and some funny dialogue. You will not get the loot though.

After reporting back to Big Marge with the egg, she will reward you with the location of a treasure hidden behind the hens' coop. Dig it up and continue on your travels.

Before you revisit the chickens, later on, progress with the Powerful Awakening quest first in order to acquire the Spirit Vision skill, which is required to progress with this quest.

Revisit the chickens sometime later on and you will find that a Voidling chick named Peeper has hatched from the egg and killed all of the chickens. If you talk to it, it will follows you around thinking you're its mother.

Serious Bug: There have been many reports that once Peeper is following you, it may get permanently stuck in some locations (e.g. Hall of Echoes, underground areas, certain buildings, etc.). It is recommended to quickly finish off this quest here and now to avoid this issue. Simply quicksaving and then immediately reloading will make Peeper appear besides you.

While you're here, use Spirit Vision to find the Spirit of Big Marge, who will tell you to bring Peeper to its father. Travel to the location now marked on your map (directly north of where you are, named "Magic Rooster") to find Peeper's father, Magicockerel.

Warning: If Peeper dies at any given time before you reach Magicockerel (e.g. in battle), the quest will close and you will lose your quest reward.

After you reach him, have a character with the Pet Pal talent speak with Magicockerel, and he will tell you to kill Peeper because he sees Void-tainted eyes. You can choose to kill him or to let him live. Note: If you do not use Pet Pal to speak to him, the quest will default to Option 2.

Choosing either option will close the quest, and you will receive experience regardless of how the quest closes. From what it seems, killing Peeper yields more of a reward than letting him live.
But killing him and the surrounding void-tainted chickens he summons when he transforms gives you around 5-5 Source Orbs at least.