Doctor's Orders is a Quest in Divinity: Original Sin II. Doctor Daeva is actually the powerful demon, Adramahlikh. Will you be able to stop him?

The name of the demon can be learned from the ancestor tree spirit at Bloodmoon island. If you speak with Jahan, he will tell you that the good doctor is the demon and is currently hiding in Arx.

Investigate the wedding site in Arx, which is also related to the quest, "The Secrets of the Dwarves", and you will learn that the doctor was the one who sent the explosive wedding cake to the dwarves with the intent to kill at least someone named Isbeil, based on the note left behind. Outside the schoolhouse in Arx, a distressed citizen may tell you that the doctor thanks you for serving him back at Bloodmoon island, if you helped the Advocate. On the other hand, if you killed the Advocate you will be ambushed at the same place by said citizens, revealing themselves as Nemesis demons. They may flee but but you will encounter them again at the Lizard Consulate and Kemm's Garden. Killing all 4 of them will yield you 599,400XP (229,700 XP in DE Edition). On DE, the three encounters will not trigger if you have pursued the other quest lines, locking you out of this XP. It is recommended to do the School, Consulate and Gardens encounters before the other main quests, especially before advancing into the Isbeil or Vault quests. Note, there is also a separate encounter at the Kemm's Garden with some plants which were grown from "peculiar seeds" that Doctor sent to Lady Kemm intended for Lord Kemm. The plant encounter will give you 193,950XP.

There are now several ways to progress this quest in Arx.
You can kill either Isbeil in the quest, "The Secrets of the Dwarves", or you can kill Lord Linder Kemm in the quest, "The Vault of Linder Kemm". Finish both quests for maximum XP gain. Once you have killed one of them, an Elven messenger will appear, clapping and bidding your party to visit Doctor Daeva at his house. You will earn 19,400XP and your journal will update.
You can just enter the house when you play Lohse.
You can use the barrel east of the house to teleport a teleportation pyramid into the cellar.
You can attack the door. A nurse will open it to tell you to stop. Get a pyramid in while it is open. Works just once.

You can find the Doctor in the 'Black House' in the northeast. Malady will be waiting there, so speak to her and she will teleport you to the Demon's home plane (starting Crippling a Demon). As you walk with Malady, she will bring you to candles containing the souls Adramahlikh will consume in the future. It is very important here NOT to snuff out all the candles, if you are looking to earn maximum XP rewards for this quest. (Warning: A Lohse companion in party will snuff out all candles given the chance.) Simply leave the Demon's home plane if you want to keep candles burning. Loot the magically locked, trapped, ornate chest before you leave!

Now, there are a couple of notes here to keep in mind. First, only if Lohse snuffs the candles, the party will gain 19,400XP each time she decides to snuff out the candles, for the first two candle encounters, 58,175 XP for the many candles. Second, the Doctor will only end up weaker if you snuffed out all the (thousands) candles.
Finally, you are highly encouraged to use the barrel alternative route to enter the Black House, listed below, rather than proceeding through the front door - this is because if you proceed through the front door and kill the Doctor, you will not earn XP at certain points since the quest will be automatically complete once the Doctor is dead. There is no real difference, other than the Doctor expressing surprise you entered via the back gate, between entering through the front door and taking the alternate route. Talk to the front door and open it to get 96,950XP, then don't enter but go to the barrel.

The alternative route (besides attacking the door) to entering the Black House is to use this particular marked barrel to sneak into the Doctor's dungeon, as shown in the picture below. If you read notes in the Fishworks area back in Driftwood and/or talked to the people there, you will learn that the Black House buys Void-tainted fish periodically from messengers, using a signal to tell them it's ready. If you picked up the "Voidwoken Fish Exchange" scroll from the Fishworks Cellar in Driftwood or Basatan's corpse back on Bloodmoon Island (Act 2), you place a teleporter pyramid inside the barrel, then use the scroll and cast it on the barrel to transport its contents inside the house. Teleporting to the pyramid will thus teleport you deep inside the house's cellar. If you continue onwards, you can find Jahan there, captured as a prisoner. Speaking to him will net you 19,400XP; you will not receive this XP if you already killed the Doctor (and thus completed the quest) before speaking to him. 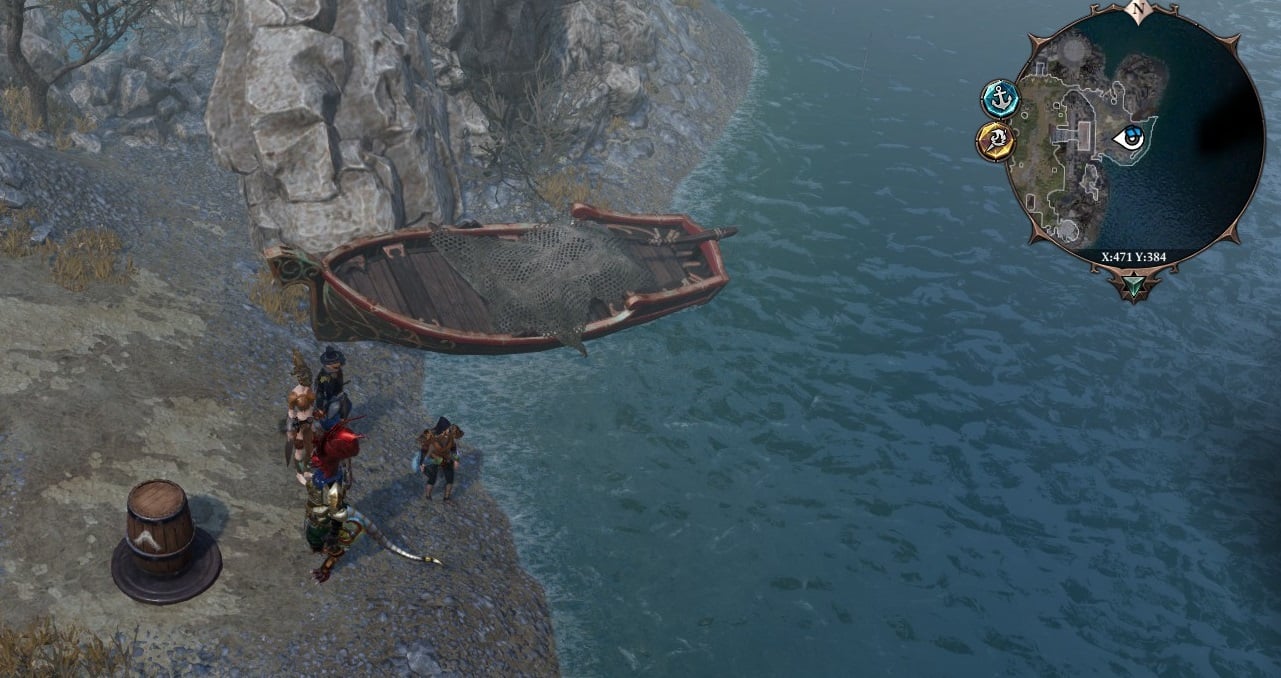 Carry on forwards and head upstairs. You will earn 26,000 Exploration XP. Lockpick the doors and then speak to the Doctor through this back route. He will express surprise, and if Lohse is in your party, this will gain you the ability to speak with him as Lohse. He will offer you a contract, but you will always refuse the contract as Lohse. Once the conversation is over, your party will gain 19,400XP and combat will begin. If you do not have Lohse in your party, then you can choose to sign a contract with the doctor, listed below.

You can also head inside the Black House through the front door. If you have Lohse in your party, you need to have her interact with the door before it will open. If the door opens you will gain 96,950 XP. Enter the Black House and you will immediately gain the 26,000 Exploration XP if you have not already. Head inside and speak to the Doctor. If you have Lohse in your party (dismissing her will only result in the Doctor refusing to speak to you), there will be no option for the Doctor to offer you a contract for some reason. Because of this, you will forfeit the 19,400XP that you would otherwise gain if you entered via the alternate route; hence if you have Lohse in your party, it is better to enter via the alternate route. Otherwise, if Lohse was never in your party, you can choose to sign a contract with the doctor, which will change the ending as listed below. If you choose not to sign the contract, he will attack you.

The Doctor has a scripted 10,000 Initiative value making it impoossible to go ahead of. You can accept the contract, steal the blood and attack him to get one hit in before he transforms.
However, depending on whether you snuffed out the thousands of candles at the end with Malady, he will either be weakened, or not. Also, if you do not kill him on the first turn, he will transform into his true form, the demon Adramahlikh. Adramahlikh will have around 7k health, nearly 11k physical armor, and 13k magical armor. Below is a comparison of his weakened and non-weakened forms:

It also bears mentioning that throwing a deathfog crate on him will not affect him or his nurses. When killed, the Doctor and his 6 nurses (sometimes, the nurse at the counter may be too far away to engage you in combat) will grant 149,850XP (37,475 XP DE Edition) each, resulting in a whopping grand total of 1,048,950XP. Killing the Doctor will also complete this quest, awarding you an additional 134,750XP.

However, it is important to note that for maximum XP gains, you actually want the Doctor to transform into Adramahlikh, and you absolutely do not want to snuff all of the candles to weaken him. As an unweakened Adramahlikh, he will summon 4 Nemesis monsters to aid him, and each Nemesis monster will award 149,850 XP (74,925 XP DE Edition) when killed.

If you have Lohse in your party, though, things get a little more complicated because if you take too long to kill Adramahlikh, Adramahlikh will use demonic possession to take control of Lohse and she will be permanently enslaved, leaving your party forever. The obvious solution to this is to kill Adramahlikh quickly but this may not always be possible due to his high armor values and perseverance skill. Also, running away, teleporting away, or teleporting to a waypoint all will not work, as the demonic effect is scripted to take control of her wherever she may be. Thus, the simplest solution to prevent Lohse from becoming possessed is to make sure she is dead; once she is dead, Adramahlikh will immediately stop channeling his Demonic Possession spell. This can actually be used to great effect, since Adramahlikh wastes his turn each time by channelling the demonic possession spell. After he tries to channel it for a turn or so, simply kill off Lohse and his spell will be reset, rendering him unable to take control of Lohse. Then, during one of your other members' turn, cast resurrection on Lohse to revive her. The next time it's Adramahlikh's turn, he will try to channel his spell again, effectively wasting each of his turn. Of course, you can simply not bother with cheesing him and just concentrate on slaughtering them all without the help of Lohse - either way, it's not a terribly difficult fight, especially with Area-of-Effect spells. Alternatively, you may lure out the nurses out starting with the nurse closest to the door of the mansion using teleport then engaging in combat, after which you should engage in conversation with the Doctor while finishing off the rest. At this time you can teleport the doctor, while still in conversation onto the bench in the main hall just outside his office. This will render him knocked out but while still in conversation mode. You can then proceed to teleport him safely without the fear of him transforming far away from the mansion to an isolated location that doesn't allow for him to move. He will not teleport back. Engage in combat with the Doctor without the added worry of him charming Lohse and using his skill of invincibility. The quest will finish as normal.

Once the Doctor is dead, speaking to Lohse at this point will cause her to rejoice at finally being free, and you can listen to her sing a special song. You can also cast Spirit Vision and talk to the spirits of the nurses, learning that they used to be people who hunted down the Doctor but failed and were subjugated to become his minions.

Enter his cellar if you haven't already and you will find two of his poor prisoners. One of them will be Jahan, captured because he underestimated the Doctor. As mentioned before, if you speak to him at this point after killing the Doctor and completing this quest, you will receive no XP whatsoever. Still, whatever the case may be, you can unlock the magically locked cabinets in the lower area here and loot various unique items such as the Lord Ruaney and Kvyn's armor sets. To open the cabinets, short-circuit them using water or blood. There are also several Eternal Artefacts and Plates. Loot the area and leave.

Shortly after leaving, an Elven Apparition will appear, thanking you and claiming to be the spirit of Eleanessa, the ancestor tree back in Bloodmoon Island. She will reward you with a ghostly mace and a choice of Divine-quality loot.