Hammerfall is a Quest in Divinity: Original Sin II. The final battle draws near; will you be able to solve the puzzles of Lucian's tomb, or die trying?

This main quest is acquired once you reach Act IV, the Hunt for Dallis.

Speak to Malady, and she will remind you that your purpose here in Arx is to kill Dallis.She suggests that you start searching for her amongst the local Divine Order.

The harbour has been overwhelmed by the Voidwoken; defeat them so you can explore the Lord Dread - Dallis' ship. Interacting with the Lord Dread will tell you that Dallis is older than it, despite it having lived as an Ancestor Tree and an elf prior to its current form. Don't forget to loot the chest for a powerful unique amulet for mages. Also loot both the rooms below te hatches north and south of the ship.

Travel through the bridge to reach the city of Arx. You will need to defeat some Voidwoken on the bridge, starting the quest, "Battle at the Gates".

Inside Arx, you will learn from some paladins hunting Magisters that Dallis can be found inside the cathedral. Talk to the now ruling Paladin Lord Linder Kemm.

In order to get in the cathedral, you need to complete the quest "The Vault of Linder Kemm"/"Finding Lord Arhu" as you need Lord Arhu to proceed the sub-quest "Wisdom of the Keeper" (which replaced the quest A Craftsman of Dreams and Nightmares) to learn how to enter the tomb of Lucian.

You could skip the following preparations by walking the Path of Blood and passing Lucians purity test. This is a hard achievement (Puritan's Walk) as a lot of things in your playthrough will cause you to die. Hiring a new party member cheats Lucian, as they are fresh and pure. You theoretically still "need" Arhu to explain the Room of Death, but well, you are reading this guide already.

Wisdom of the Keeper

Find Lord Arhu and Toyseller Sanders. Get Lord Arhu to help you enter the Tomb of Lucian. He will then send you to Toyseller Sanders for additional instructions.
Convince Sanders (by force) to help you. Sanders has a Source amulet, which you will need to fill with five souls. There is an unlimited Source fountain is in Arhu's prison. Source orbs and Vampirism do work as well.
Once the amulet is full Sanders will send you to fetch the Scroll of Atonement from his locked desk in the upper floor. It is the second part of bypassing the Path of Blood.
Some of Sander's Moppets will attack you on the upper floor because the God King possessed them. The password for the protected desk is "Giyora".
Talk to Lord Arhu again to learn about the Room of Death.

Once you have the knowledge on how to traverse the traps made by Lucian from Lord Arhu and the amulet and scroll from the Toyseller, you may proceed into the cathedral. Remember to finish all your side quests and companion quests before proceeding. You will gain Exploration XP upon approaching the cathedral.

Head forwards, towards the Path of Blood, where a Hopeful Pilgrim will run ahead of you and attempt it. Obviously, he will be struck dead, and you can then pass. Pass on forwards and approach the statue, talk to it if you want to pass the purity test of the Path of Blood.
The Back Door: to the left of the statue is a switch as shown in the picture below. Put the Source Amulet acquired from the Toyseller in it, then read the Scroll. The amulet will need to be completely full of source. If done correctly, the button will sink in and a hatch will be revealed. 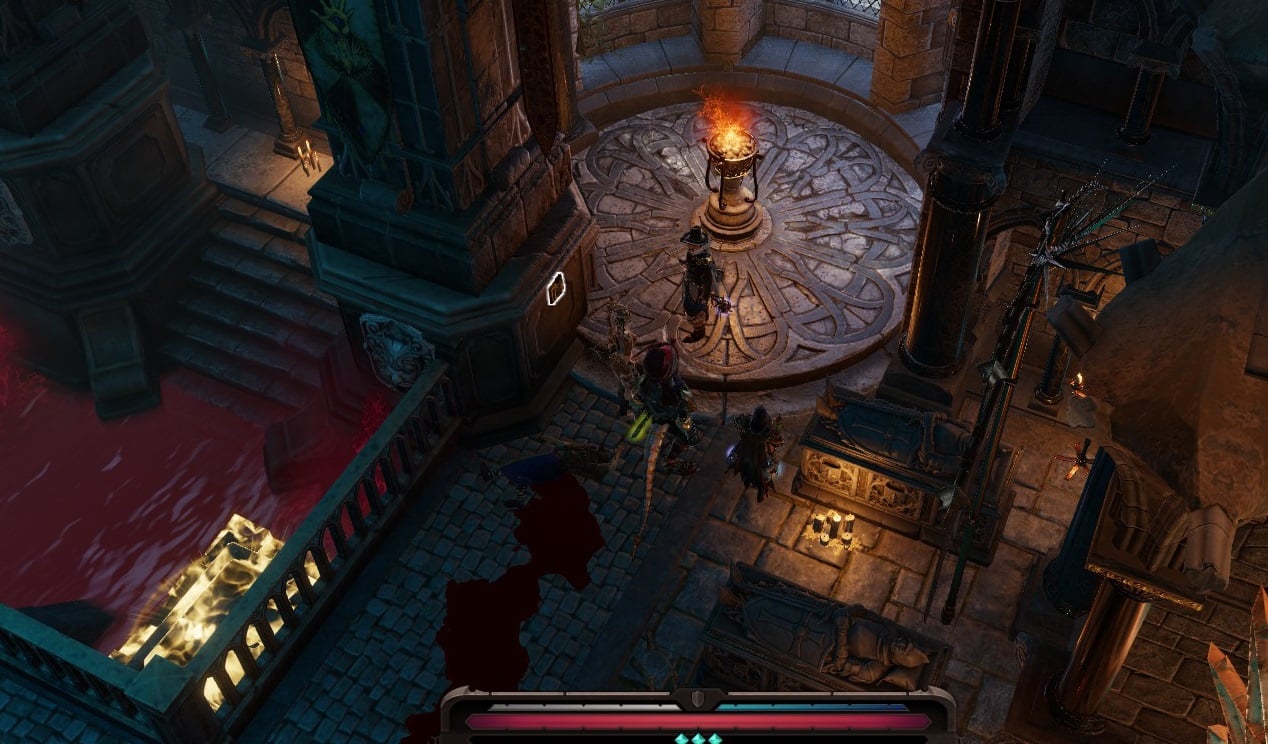 Once you enter the hatch, you will come to the Crypt of Lucian and immediately earn 80,850XP. There will be a waypoint and puzzle waiting just ahead.

To solve it, first, you need to create some blood on the iron grate, as shown in the picture below: 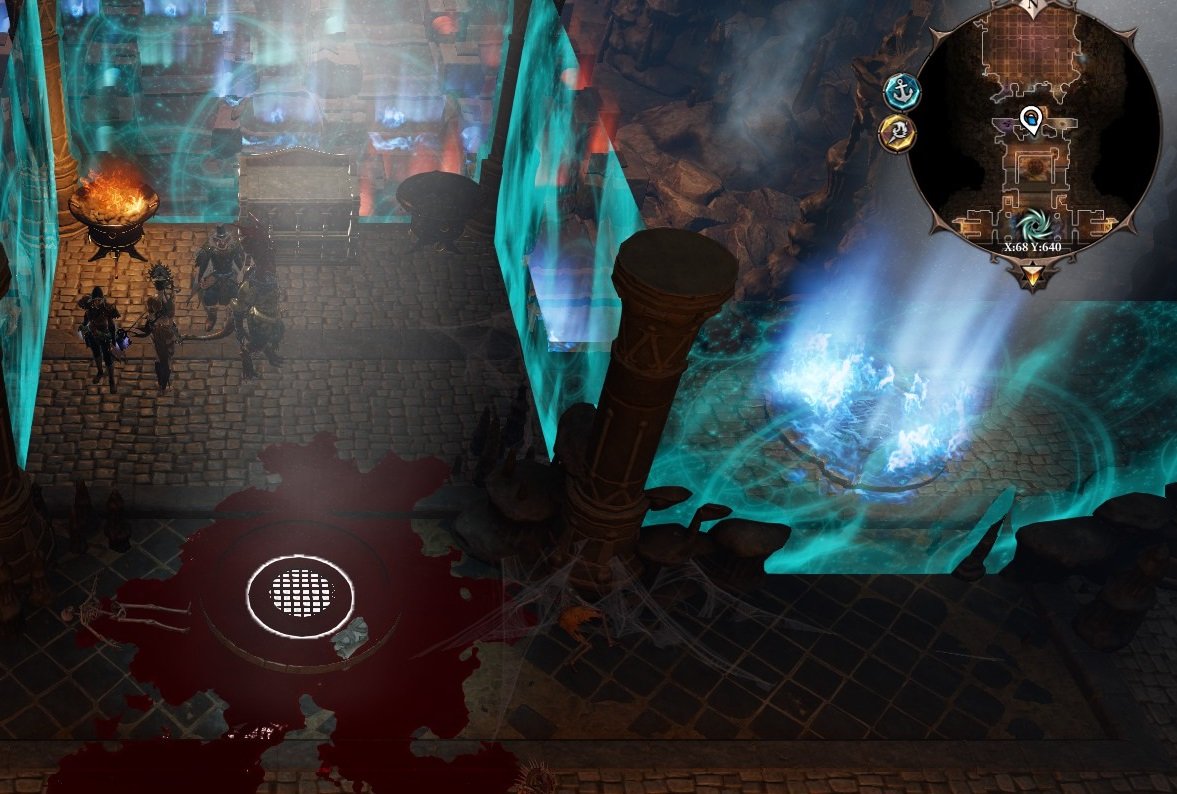 Cast Blood Rain on this grate. If you do not have Blood Rain, you can attack yourself for some blood or use an Elf's Flesh Sacrifice. Fire and water are blessed, now Bless your blood. 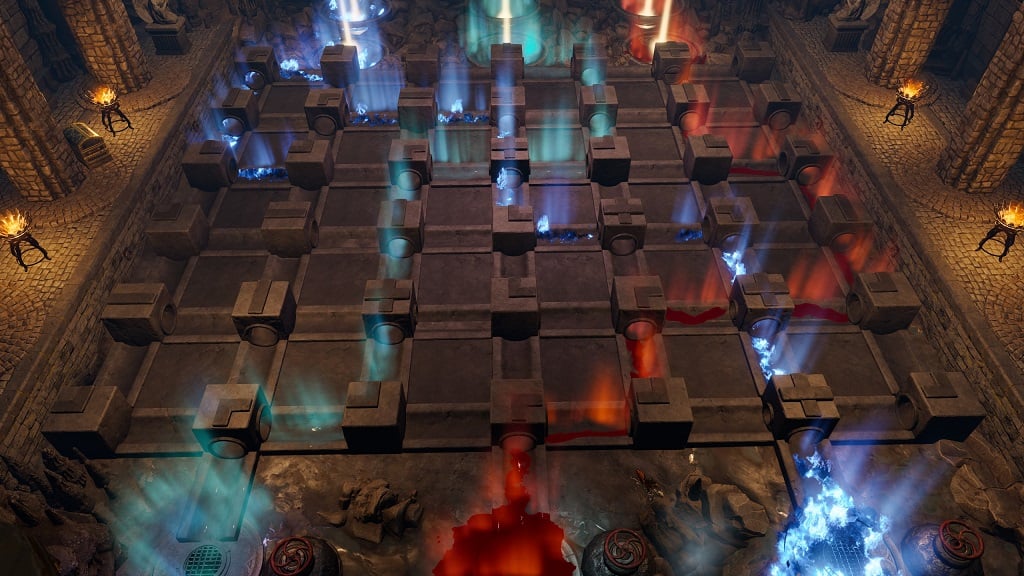 Once you have aligned the pipes correctly, touch the altar and pick the first option to activate it. The glowing stuff will start flowing and after ~30 seconds the puzzle will be solved and the coffin of Lucian will be moved, revealing a secret hatch.
To loot the ornate chest below next to the pipes, you can use Telekinesis to move a Teleporter Pyramid through the barrier.
Now enter the secret hatch below the coffin.

You will come to a place called "Line of Anguish". Interacting with the door ahead will give you a warning. Be careful; when you enter this death room, you will meet with a bunch of source puppets who will interact with the levers and annoy the crap out of you, inflicting annoying statuses such as the cow status and the like. They can be permanently killed by stripping their magic armor and then casting Source Vampirism on them, and you can also use area effect spells to destroy many of them in 1 go. When they are all dead, pull the five levers bearing the initials that spell "POWER". In this case, Potency-Order-Wisdom-Empathy-Righteousness; the sequence does not matter. You can also use one character to turn invisible and activate the levers while your other characters are in battle with the puppets; this will kill all the puppets. The puppets give no XP, although each one killed has a chance of dropping puppet beads (which can be used to make Apotheosis scrolls) and source orbs. The picture below shows the location of the levers: 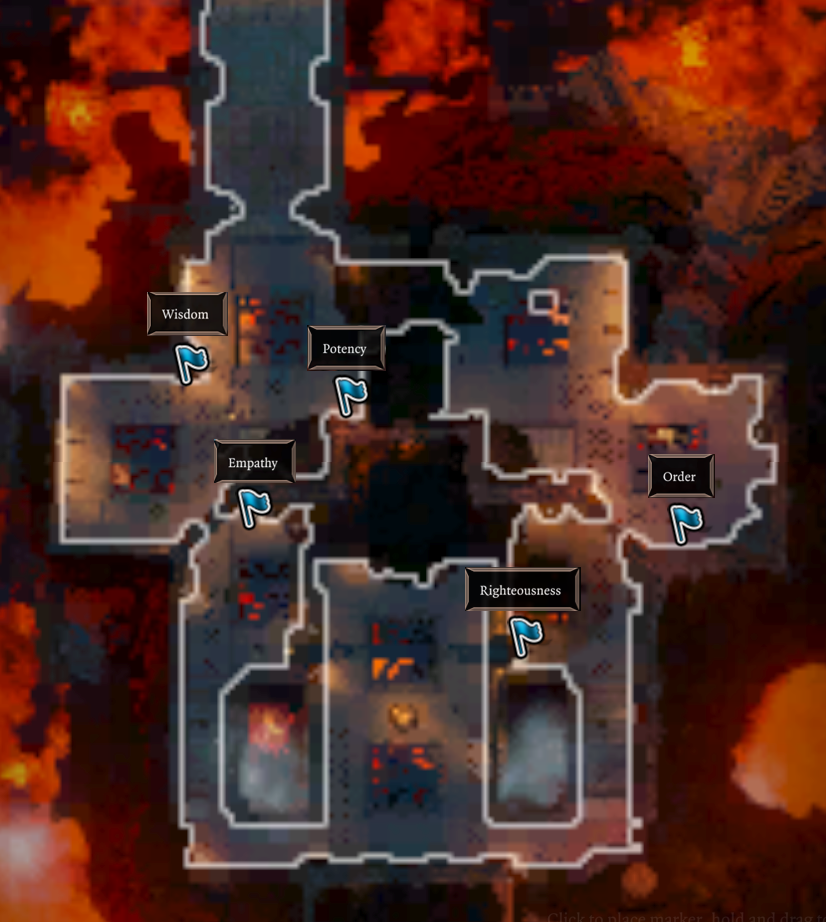 After activating all the levers, the barriers will be cleared. It is time for the final battle. Make sure you are ready before you enter the real Crypt of Lucian, because after this point, you can no longer go back. Ensure you have finished all the quests, memorized your best skills, and equipped your best gear, because the end draws close.

This marks the end of Act IV. Divinity awaits.