Love has a Price is a Quest in Divinity: Original Sin II. Short description goes here. 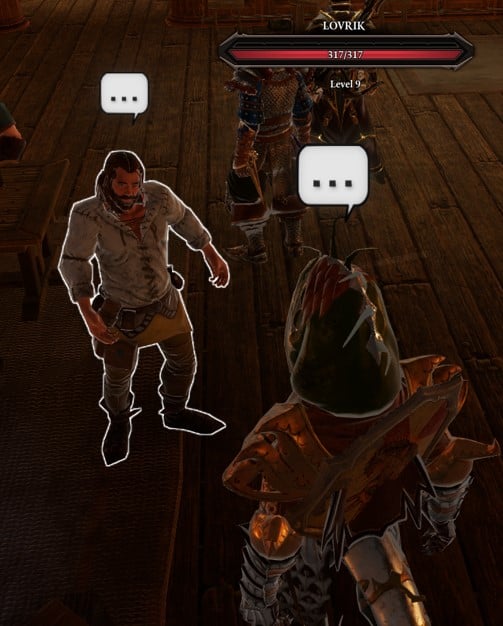 Love has a Price Objectives

WARNING: TRANSFER KEY TO CHARACTERS OUTSIDE ROOM, YOU'LL STILL FIGHT!
1. Go. Don't look back. Run away/Flee (for some reason these change, but they all work)
2. Get out now while you still can/Flee (for some reason these change, but they all work)
3. Give her a stern look... then smile. Hook a finger towards here: 'Come here'
4. Tell her she's beautiful... but you can't do it.
5. Forget it. Turn away.
6. Tell her she should be paying you. Make to walk away.
7. Wait.
8. Sounds like a challenge. You're in.
9. Sidle back to her. Take her into your arms, into your heart, into your very being...
10. Ask what the hell is going on.
11. Appeal to your lizard lover for help.
12. Either one.
Congrats! Your lizard lover will give you a unique dagger (Ornate Dagger) and fight the dwarves with you!

Love has a Price Walkthrough

A man named Lovirk at Driftwood tavern promises you 'something exotic' that is worth trying. If you convince him via speech check or tell him a good joke about talking dogs via the Jester-tagged dialogue options, he will waive the initial fee (else, it'll cost 150 gold). You will gain 3000XP for this. After he reveals his non-negotiable exotic fee of 100 gold, he will give you the key to a suite on the 2nd floor.

Use the character and enter the suite alone, then talk to the lizard and spend a night there. You will receive, 6000XP. If you refuse the prostitute, you will receive, 3000XP and have to try again with another character. The next morning, some thugs (about 5 of them) will suddenly show up while you are naked, demanding money. If you are Ifan ben-Mezd, the thugs will recognize you and leave. Otherwise, you will have to pay them or fight. Your gear is in the burgled backpack on a table next to the bed. If you are playing as the Red Prince, then the lizard you meet will turn into the Red Princess instead. If you are undead, the prostitute will fight with you.

Head back down and confront Lovrik, and he will claim he did all these for his daughter. If you ask the cook, you will learn that he's lying, and you will find that he fled while you weren't there. If the cook is dead, then you won't find anything and the quest can't proceed until you kill him. Killing him grants no XP, but he has a significant amount of gold on his corpse. If you did kill the thugs and confront Lovrik, you can also spare his life and the quest will conclude rewarding you a final 3000XP (after which you can kill him anyway to get the gold too, though the quest will have already been completed, and the log will not update further). If you believe he has a daughter, Lovrik will flee, concluding the quest but granting no additional XP.