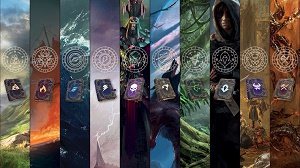 The ten schools of magic in Divinity: Original Sin 2

Skills in Divinity: Original Sin 2 are actions or spells that are used by characters to cause a particular effect. Skills remain largely unchanged from the first game, with key differences to account for the changes implemented to the combat system, notably the introduction of Source Points.

In Divinity: Original Sin 2, skills are primarily learned by reading Skill Books, either purchased (or stolen) from vendors or found as loot throughout the game. Crafting books is now also possible, by combining empty skill books with skill scrolls or combining two books to create entirely new skills.

Characters can learn skills as soon as at least one point is invested in that school's corresponding Combat Ability, with the caveat that the number of usable skills on the field is dictated by the characters' Memory stat. Stronger skills need additional levels in their required Combat Abilities, and crafted skills need points in both of their component schools' Abilities. Note that bonus Ability points from buffs and equipment count, but skills will be rendered unusable should these bonuses no longer apply and fail to meet the requirements. Skills are no longer tiered by difficulty; the more powerful they are the more Memory slots they occupy.

Skills can also be found in equipment, some of which are unobtainable elsewhere. Elves, with their exclusive Corpse Eater ability, can also acquire skills by reliving the memories of specific corpses. Pet summoning skills are rewards for fulfilling that pet's side quest, one that is exclusive to the Red Prince.

Aside from higher Ability levels and more Memory slots, the more impressive Skills found in Rivellon demand "Source" — spiritual power made manifest. Source is rare and limited — obtained by consuming souls or stepping in seldom seen pools of it — thus skills that are fueled by Source points can only be cast a finite number of times. Characters can only hold a restricted amount of Source points, which increase to a maximum of three points by completing story objectives. Books that house source skills are identifiable by the teal glow surrounding their icons.

In addition to converting Skill Scrolls into permanent Skill Books, Divinity: Original Sin 2 provides the means of creating entirely new skills. Crafting a new skill is done by combining a Skill Book from one of the elemental schools (Aerotheurge, Geomancer, Hydrosophist, and Pyrokinetic) with one from a non-elemental school; for instance, combining a Hydrosophist book and a Necromancer book will yield the skill "Blood Rain". More powerful versions are craftable if source skills are used as components in the process; the example above will result in the more potent "Blood Storm" in this case. Crafted skills are identified by their unique "sparks and anvil" cover. Please see Crafted Skills for details.

Skill scaling in general. Abilities also contribute to the skill's power where applicable.

In contrast to the first Divinity: Original Sin, the purpose of Skill Abilities is not to determine how many of the corresponding school's spells you can learn and how many Action Points it costs to use them. Instead, these Abilities provide a variety of innate bonuses for the character as a whole. For example, the Hydrosophist ability provides bonuses to all forms of healing, magic armour restoration, and water damage you cause; this bonus is not exclusive to Hydrosophist spells and will apply to skills from other schools as well.

Skills do not have recommended Attribute requirements that determine their efficiency. Rather, skill effectiveness is mostly based on either the characters' levels or the basic attack damage from their equipped weapons, receiving bonuses from the appropriate Attribute.

Three spell schools comprise mostly of weapon skills, and derive their damage and bonus Attribute from their associated weapons. Huntsman and Scoundrel scale with Finesse, as they use ranged weapons and daggers, respectively; Warfare, which calls for melee weapons and shields, can scale with Finesse (daggers and spears), Intelligence (staves), or Strength. All other skill trees scale with the character's level and Intelligence (or Strength in Polymorph's case). Restoration and summon skills grow with Skill Abilities.

The following Image contains a general comparison of the damage of each skill of all schools around level 20. 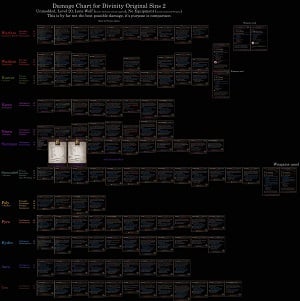 All eight of the skill schools from the previous game return with new bells and whistles. Divinity: Original Sin 2 introduces two new schools, Polymorph and Summoning, with another one that is central to the game's story that becomes available as players progress. Special is the catch-all category for skills that do not belong elsewhere. Crafted skills fall under only one school despite their compound nature.

Totems of the Necromancer

Grasp of the Starved

Living on the Edge

Thick of the Fight