The Academy is a Quest in Divinity: Original Sin II. You have entered the Academy, the final path on your quest to ascension and Divinity. Only one barrier blocks your way. Will you succeed?

Enter the Academy. You will immediately receive 20075XP upon entering. Ahead is a Voidwoken. Chat with it and it will ultimately ask you to accept a pact with the God-King. If you accept, you will become Sworn. This will drastically change your quest path to a more evil one, but it can be broken with the Swornbreaker, which you can either craft (see "The Key to Freedom" for details) or get later on in Arx. In any case, if you accept and become Sworn, your Bless ability will be replaced with a "Curse" ability, you will receive 2 free revives upon death, and you will gain 2 Attribute points, 2 Combat Ability points, and 2 Talent points. If you refuse, nothing changes and you can continue onward (Optional: Attack & defeat the Voidwoken for tons of XP plus good loot such as divine grade helmet. If you plan to accept the Covenant you can lower the Voidwoken's attitude by attacking it during dialogue. You will fight it after ending the dialogue and receive the Covenant's bonuses as well as the loot and XP).

As you head in deeper, you will find a variety of interesting places and people to talk to.

Directly ahead of you is "The Seneschal", lying broken near the Waypoint. It can be repaired if you have a Phase Capacitator, which is used for a variety of actions here in the Academy. Speaking to it will give you some information about the Academy, but is otherwise unnecessary.

To your right is the Teacher's hall, where you will find the skeletons of these teachers around a long table. If you cast Spirit Vision in the Teacher's hall, you will be able to see the spirits of the teachers. Each of them can boost one of your attributes, at the cost of another attribute. If one character has been boosted by a teacher, other characters can no longer be boosted by that same teacher, so make sure to choose which character would receive the boost wisely! Below is a full list of what each teacher does:

It is also worth noting that in this Teacher's hall, there are 2 "secret" places you can get into for additional XP. First, there is a locked door here that leads to a portal for the "Proving Ground" quest, which grants good XP and loot. Lastly, there is a seemingly blocked wall that has a lever behind it. All you have to do is stand close to the wall, and use a teleporting skill to teleport over the blocked wall, then activate the lever to remove the blocked wall for the rest of your party to move through. Be wary of traps here, but follow it through the end for an easy 30,100 Exploration XP.

By heading right into the Teacher's hall, and then forward, you will reach the Library, which has many spirits you can talk to. Simply cast Spirit Vision and talk to them to learn what happened here. You can also receive a quest here by speaking to the spirit of Taryan Graye.

There is a quest Unscholarly Pursuits in the library. Cast Spirit Vision and speak to ghost of Taryan Graye, her lover's spirit can be found in forbidden library. (you can get there through teleporation near the source pool, or open the door by activating the switch in following order: switch on the floor (not visible by alt-item-vision), switch on the east wall, tablet near desk on the south east, lastly lever to the right of the door) 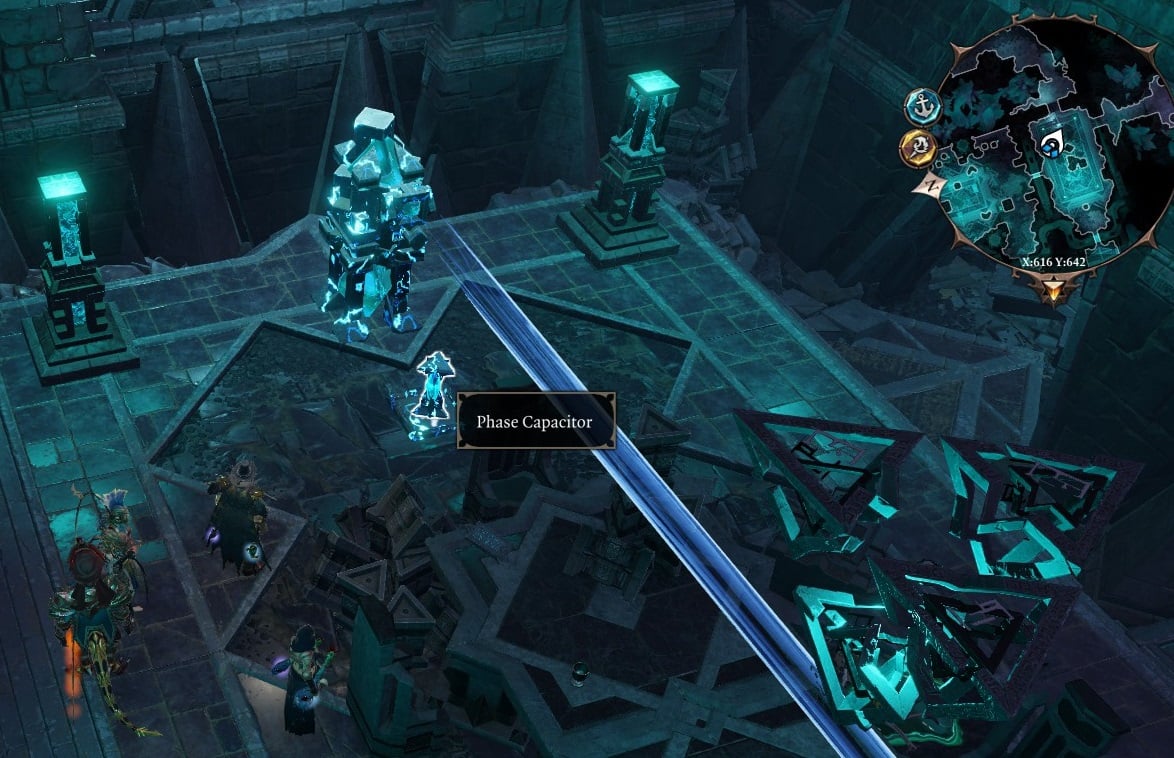 Now, after you have placed the Phase Capacitor on the lightning square in the Teacher's hall, adjust the following Eternal Reflectors to the proper position as shown in the pictures below: 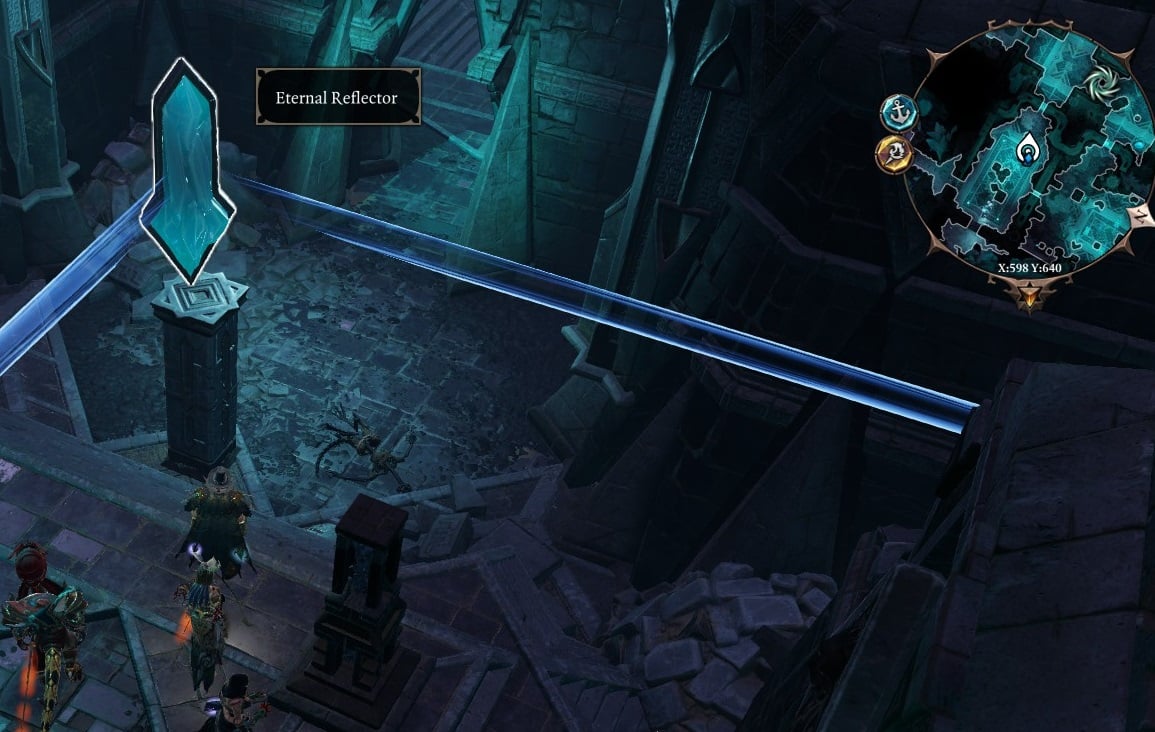 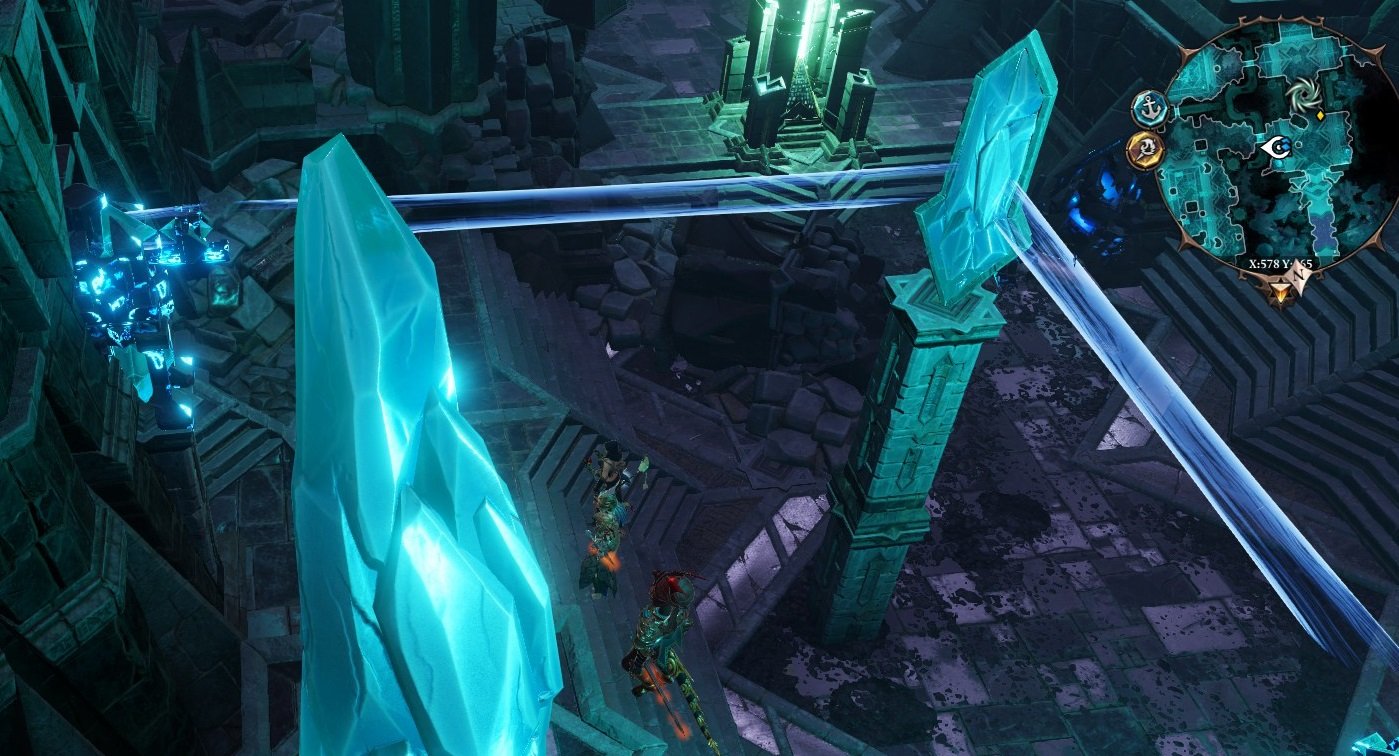 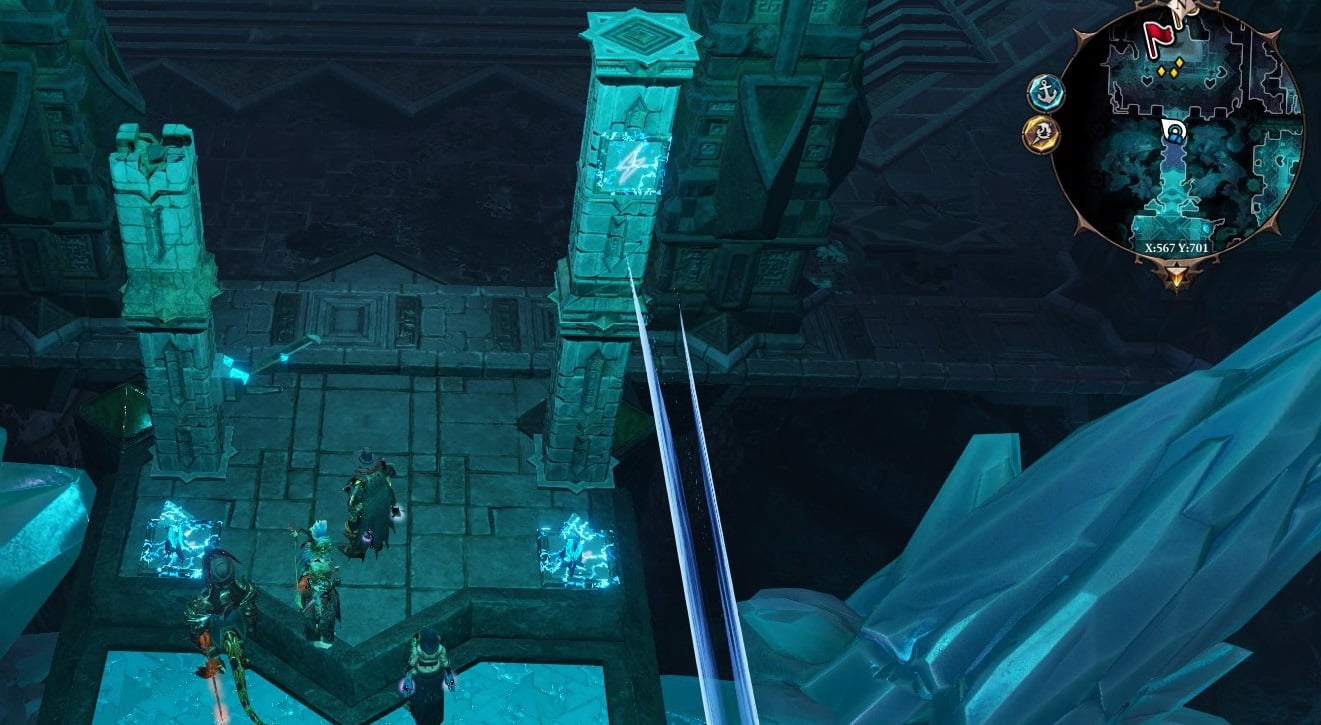 After you have electrified all three squares in front of the barrier as shown in the above picture, use the switch to lift the barrier. You should have more than enough Phase Capacitors by this point, but in case you don't have enough, you can simply create a water surface and cast lightning spells on it to activate both squares on the ground. In any case, once the barrier is down, proceed onwards for 27,900 Exploration XP.

You will come across Alexandar (if he survived) and the other NPC companions you didn't choose back when the ship was under attack in Act II (like Beast or Ifan Ben-Mezd, for example), where they were presumed to be dead. On talking with them, you will realize that the God-king turned them into Sworn and they are now no longer the same people you once knew.

Enter the source pool to refill your source points and get ready for a big "race" to the Wellspring to ascend and become the Divine. Ensure that you have finished all the quests and things you want to do on the Nameless Isle before proceeding - this marks the "no return" part to Act IV. When you are ready, speak to the Eternal Arbiter to enter the Arena of the One, where your former companions will try and prevent you from ascending. You will receive 27,900XP and this quest is effectively complete.

This quest continues in "The Arena of the One".