The Forgotten and the Damned | Divinity Original Sin 2 Wiki


The Forgotten and the Damned is a Quest in Divinity: Original Sin II. Coming across various Blazing Sculptures on Bloodmoon Island, you get the feeling they hide treasures beneath them. However, they don't seem to budge when you try to move them. How will you get past this obstacle?

The Forgotten and the Damned Objectives

The Forgotten and the Damned Walkthrough

On Bloodmoon island, there will be a Blazing Sculpture facing the demon's camp. You may interact with the statue to acquire this quest. You can also acquire this quest by picking up the book "The Taming of the Holy Fire" and read it as a Scholar.

There are 3 sculptures on Bloodmoon Island. In order to activate them, you will need to read a book called "The Taming of the Holy Fire". This book is called "Ornate Hymnal" before you decipher it, and you can find one from these places:

You will need a character with the Scholar tag in order to decipher the book's hymn. Reading the book as a scholar will net 14,450XP. Before you enter the vault, however, make sure to first go to the north of the island and find the Ancient Forge (co-ordinates X:317, Y:479). Use the Ancient forge to combine it and the silver bar to create a Silver Lever Shaft. You only need 2 Silver Lever Shafts in the game, for vaults 2 and 3. Silver bars can be found right next to the forge, and on a Black Ring member in the unfinished crypt. There should also be one inside a vase in vault 3.

There are 3 vaults scattered around the southern part of the island, near the demon's camp. Use the hymn to destroy the statues and get into the vault. The quests Delusions of Grandeur and Bound by Pain require you to fix the switch with the Silver Lever Shaft. More details are listed below for each individual vault.

The Location of the Archives:

This is where you will find the Green Teleporter Pyramid, and medical notes to start the "Delusions of Grandeur" and "The Silent One" quests. See "The Secrets of Bloodmoon Island" for more information about this location, including rewards earned.

If you read the notes, you will realize that these vaults actually house people afflicted with demons that the healers could not treat. These afflicted persons were thus locked away along with a healer in order to prevent the demon from ever being a threat to humanity.

The Location of the Vault 1 (Unfinished Crypt): 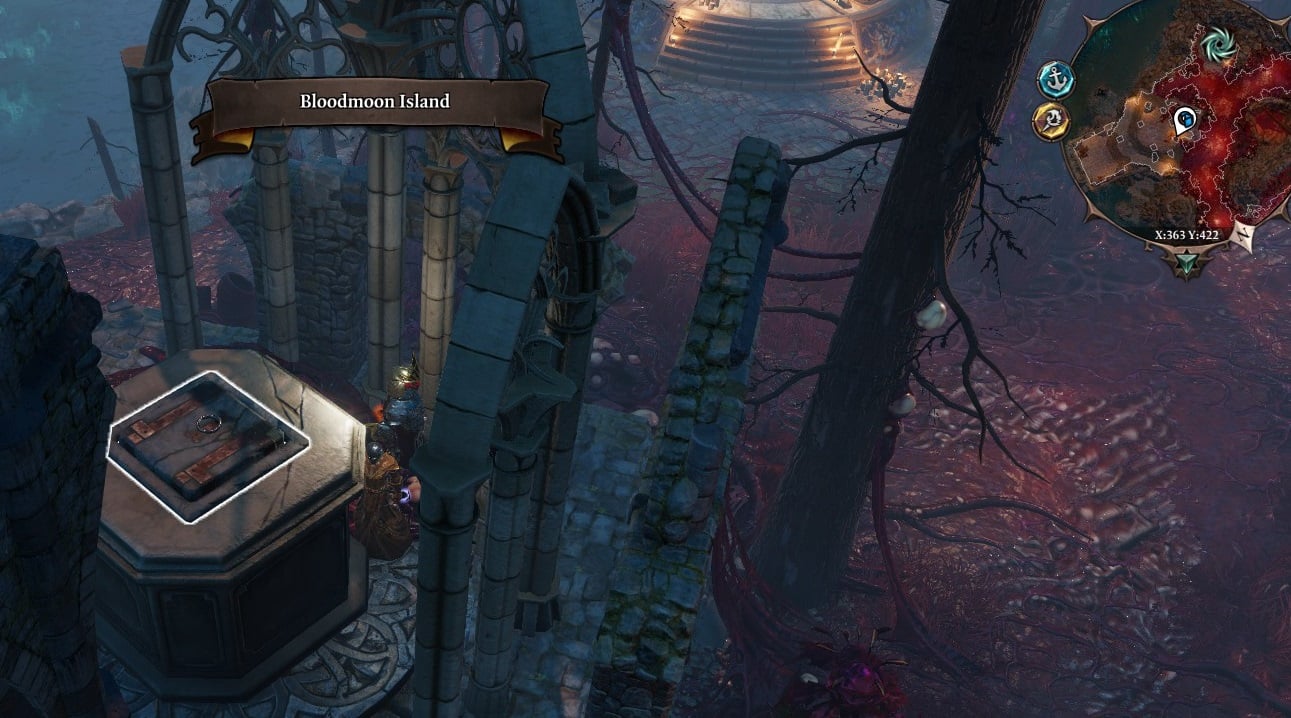 This crypt is unfinished and holds nothing really noteworthy of value, except for a Silver bar. Exploring it might be necessary for the completion of this quest, though.

The Location of Vault 2: 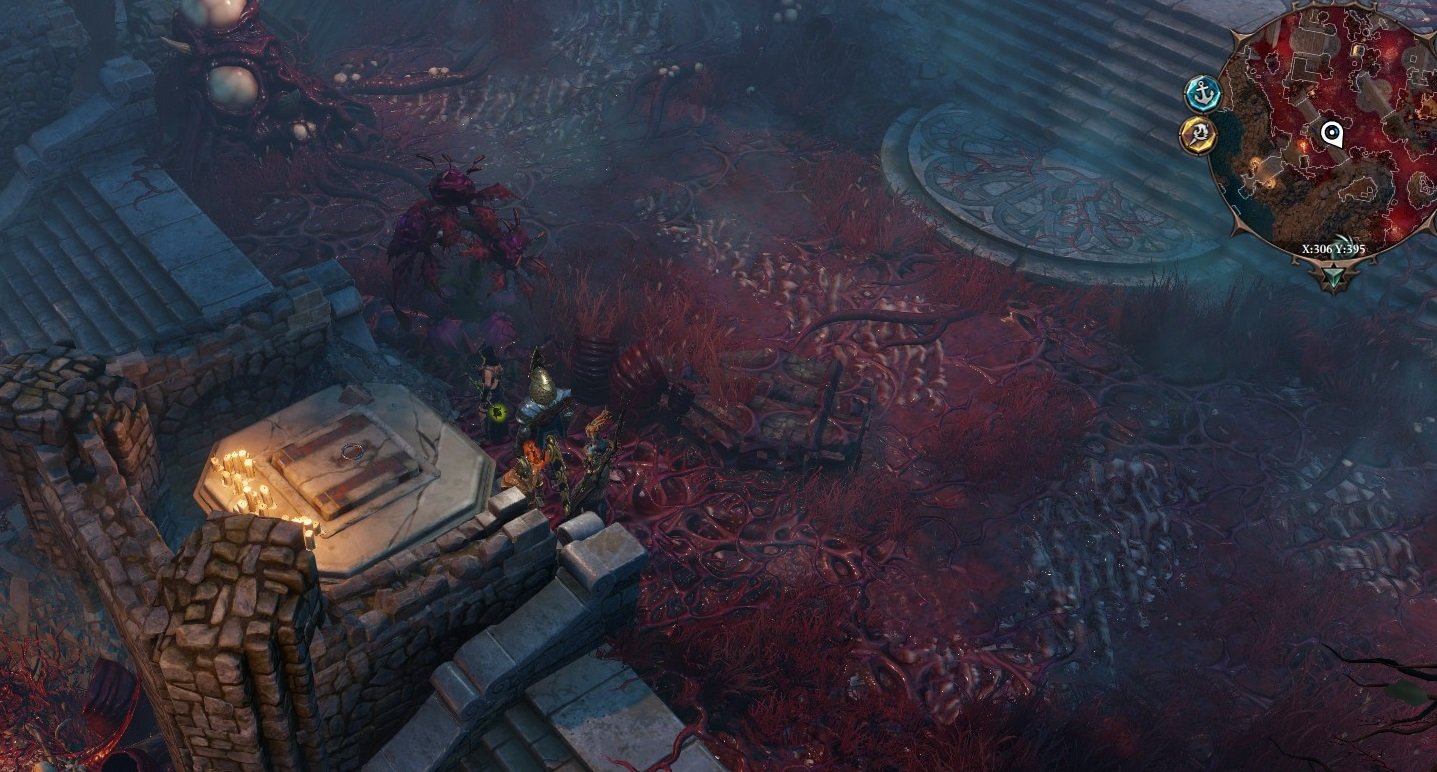 Upon entering this vault, you will come across a broken lever shaft where you will need to use the Silver Lever Shaft to fix the broken lever and open the wall door. Unfortunately, when you try to use the lever, it doesn't work. Cast Spirit Vision to reveal the spirit of Brother Robert near the statue, and speak to him. Pass the persuasion check and he will unlock the door and beseech you to kill the creature within.

Enter the room and tread lightly. If any character takes the source from the source pool in the room, the lizard will initiate dialogue with that specific character, so be careful. If you agree to set her free, Rajjarima will steal all the source points from your character and break free, initiating combat. Be warned - when she breaks free and initiates combat, she will cast a powerful Arrow Storm that will deal massive damage to your party, especially if they are bunched up together, possibly even killing 2 or 3 of them outright. In any case, kill the possessed Godwoken.

If you refuse her, you will eventually need to pass a speech check. If you are successful, she will not be able to steal any source points from your character and be unable to break free. You can then simply rain arrows or cast ranged spells to kill her safely from high ground.

Ultimately, the simplest method here is to attack her from high ground from the start and not even bothering to pick up any source points from the pool.

Regardless of the method, once she dies, you will earn 36100XP + 21675XP for a total of 57,775XP, and the quest "Delusions of Grandeur" concludes. Remember to speak to the spirit of Brother Robert on your way out for a choice of loot reward.

The Location of Vault 3: 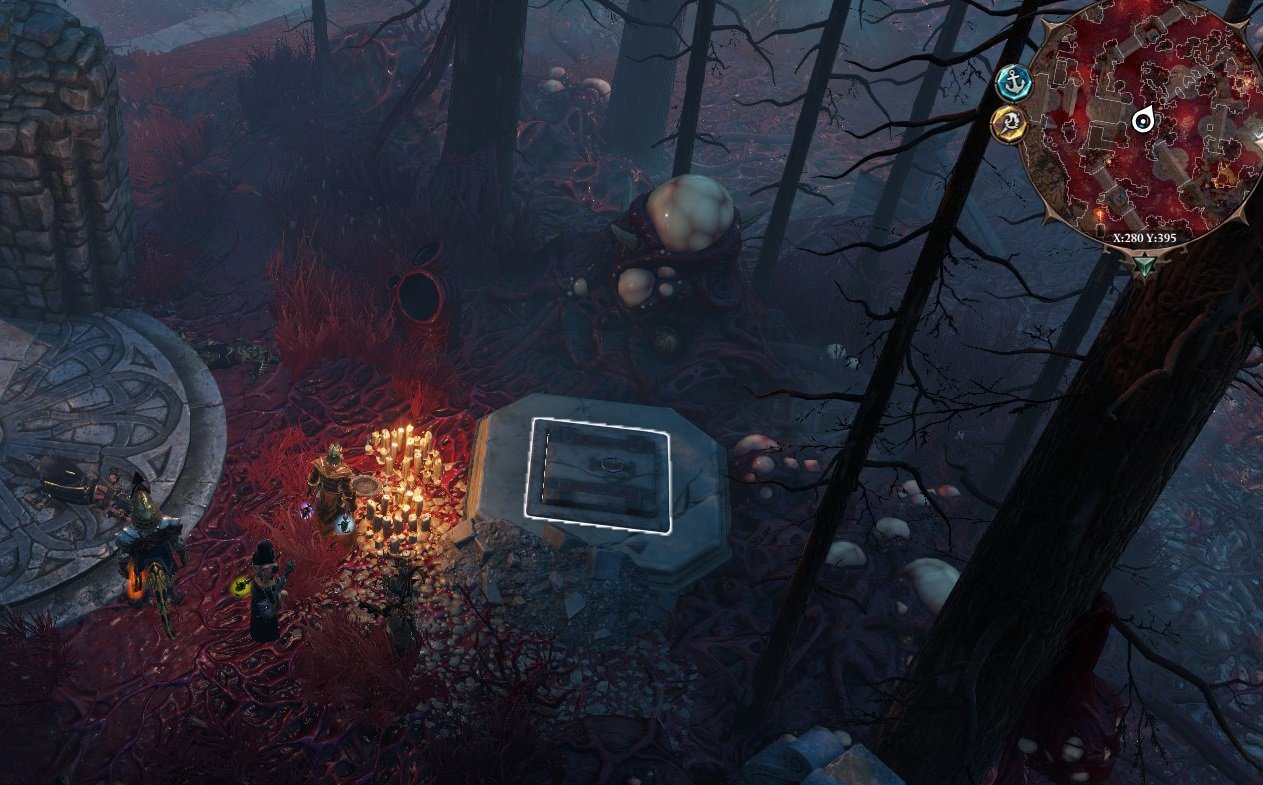 This Vault is the location for the "Bound by Pain" quest. Enter it, cast Spirit Vision, and speak to Brother Kalvin. Here, you will learn that the demon housed here gluts itself on pain, and only by inflicting the most painful torture possible will you be able to bring the demon to surface. In any case, go ahead and fix the broken lever with a Silver Lever Shaft, then talk to Brother Kalvin again and convince him to open the door for you. You will have to pass a speech check in order to convince him to open the door. Be careful; the Intelligence speech check seems to fail even at 7 persuasion - whereas the memory speech check passed with 5 persuasion.

In any case, once the door is opened, you will come face to face with a possessed dwarf. He will then beg you to destroy the pillars, which of course, when destroyed, will simply free him and initiate combat. Unlike Rajjarima in Vault 2, though, he is weak, and it shouldn't take much effort to kill him for 28900XP.

After he dies though, a demon called "Mor the Trenchmouthed" will appear, attacking you immediately. He is slightly stronger than the possessed dwarf, but is still a relatively easy opponent. The caveat here is that when you damaged Mor, there is a chance he will instantly possess a random (or perhaps closest) party member and turn him or her against you (this effect shows up as "Demonic Invasion" and is not curable). Simply inflict enough damage on that party member to bring him or her near death, and Mor will leave your party member's possessed body. Attack him and he will perish for 21,675XP.

Also, there is a bug that, if Mor was knocked down and a strike from one of your party members would otherwise land the finishing blow, Mor would disappear, placing the "Demonic Invasion" debuff on one of your characters but that character doesn't actually go mad. The combat will end in this case and the debuff will remain on your character permanently, until that character takes fatal damage with 10% or so HP, causing Mor to suddenly appear out of nowhere again and initiate combat.

Alternatively, the better option is simply to save the dwarf from possession. The trick here is simply use one of your party members and continuously damage the dwarf's HP, but not kill him. It is probably recommended to cast healing spells on him so that he doesn't die. You will know its working as he keeps getting knocked down. Keep hitting him until he doesn't get knocked down anymore, then destroy the pillars. It is possible to do enough damage to the demon that it dies. In this case, you will be rewarded exp for killing the demon while it is still inside of the dwarf and the demon will appear as a corpse when you break the pillars.

The moment the pillars are destroyed, the demon should leave the dwarf's body while keeping the dwarf intact. If you did not kill the demon while it was inside the dwarf, then at this stage, it is the same as if you killed the dwarf; damage Mor and if he possesses one of your members, damage that member until he or she is near death as well and Mor should leave the body of your party member. Attack him when he appears and he should perish, granting you 21,675XP. In this case, though, the dwarf survives, and talking to him will net another 36,100XP. The quest is concluded at this point.

As you make your way out of the vault, make sure to speak to Brother Kalvin for a choice of loot reward. If you did not manage to save the dwarf, Brother Kalvin will instead sadly disappear, leaving you with nothing.

The Location of Vault 4: 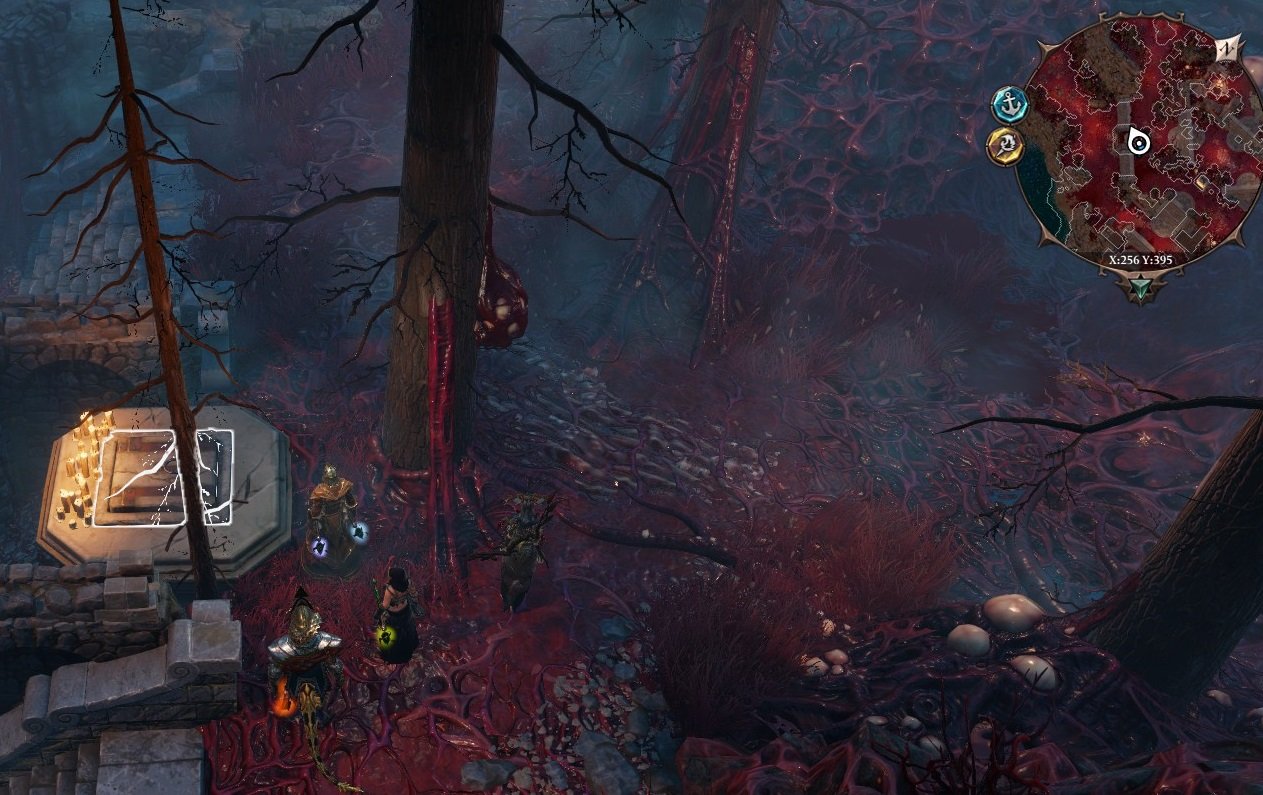 This is the vault for "The Silent One" quest. Enter it, and use Spirit Vision as usual to see the spirit of the dead healer, Brother Morgan. Speak to him and he will ask you to bring the poor girl confined within the vault to somewhere peaceful. Agree (or lie) and he will open the vault for you.

If you pass the speech check, you will gain 14,450XP and be able to teleport the girl aboard the Lady Vengeance to cure her at a later stage. The quest, "The Silent One", is complete at this point. Speak to Brother Morgan on your way out and you will receive a choice of common-quality loot reward for your troubles.

After exploring all 4 vaults, the quest should conclude with the last entry being "We found and cleared all four vaults on Bloodmoon Island".