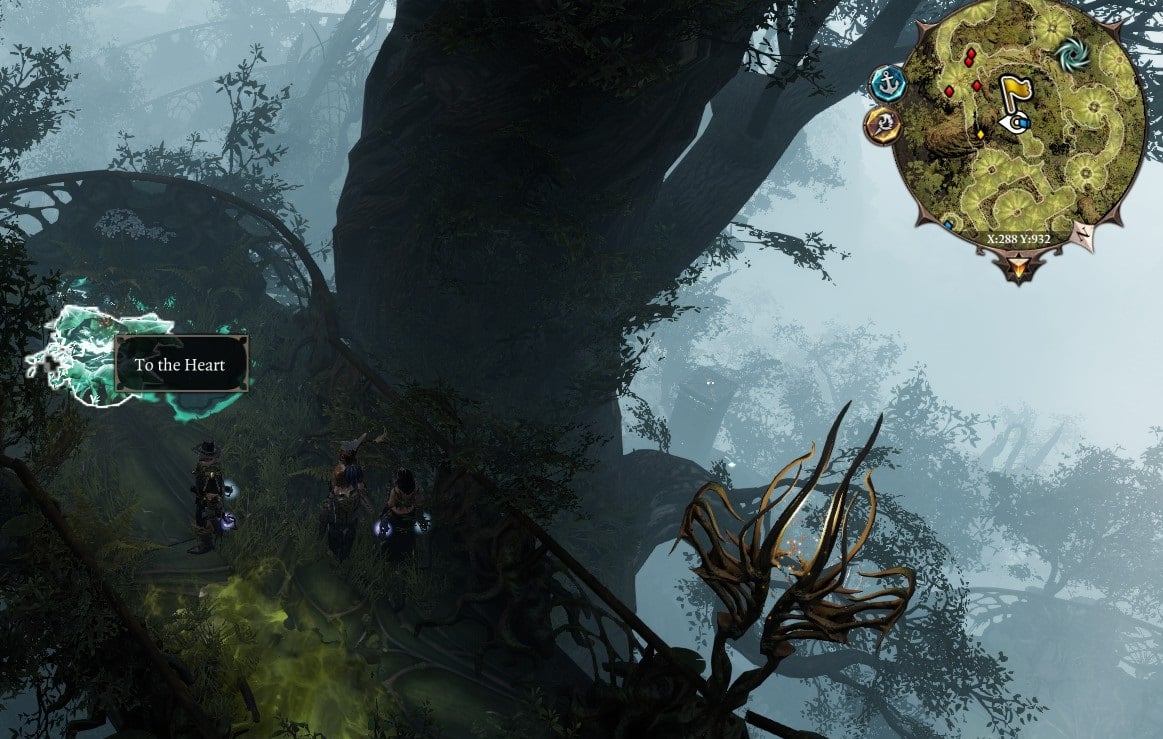 At the HEART of the tree, there is an Elven Scion you can talk to, who will bid you to kill the Shadow Prince. If Sebille is in your party, she will request to speak to the Elven Scion and you can simply watch the conversation that unfolds.

Leave the HEART and suddenly Saheila will appear. She asks Sebille to kill the Mother Tree to set the Elves free, a drastic change from her previous personality.  You will have 2 options. You can follow Saheila's advice and kill the Mother Tree, or you can ignore her and kill the Shadow Prince (or both, if you prefer, but do so upon completion of the quest for maximum XP).

If you choose to kill the Mother Tree, you will need to interact with it and use the wooden box the Shadow Prince gave you, or have Sebille in your party; otherwise, there is no option to kill the Mother Tree. Depending on the option taken, the outcome can differ drastically! Please read below for more details:

If you choose to kill the Shadow Prince, simply head to the Lava fields south of the Isle. The location of the Shadow Prince is marked on your map. As you get close to him, you will receive 20,075 Exploration XP (10,050 XP in DE).

If you have Sebille in your party then killing the Shadow Prince, turning in his heart (with Sebille at a distance), agreeing to become "rooted", then leaving to meet Saheila, then returning to kill the heart will grant you a full 60k more experience than killing the Heart first then killing the Prince. It will also enable you to keep the Rooted perk from Sebille even if you killed the tree afterwards.

Either way, you are still offered the same choice even if you don't have Sebille or The Red Prince in your party; the Shadow Prince will request you kill the Mother Tree, giving you a wooden box to do so. You can oblige, or you can simply kill him. The Shadow Prince and his 5 goons are worth 40,125XP each, making it a grand total of 240,750XP (DE Edition Shadow Prince 40,125 XP, 5 goons 20,075 XP each total of 140,500 XP ). Loot his body for his heart (you can eat his heart as an elf to learn the "Daggers Drawn" skill, but if you do so you will forfeit all rewards associated with this quest!) and head back to the Mother Tree.

From here, if you have Sebille in your party, make sure to move her far away from the Elven Scion before talking to her. The reason is because you will receive 80,250XP (100,300 XP in DE), a choice of legendary-quality loot, and a giant-quality rune when you give the Scion the Shadow Prince's heart, completing the quest, but if you have Sebille close by when you speak to the Scion, you will obtain only the XP and rune, but not the choice of legendary-quality loot. As such, for maximum rewards, move Sebille away from your party first and complete the quest, then speak to the Elven Scion again with Sebille close in tow.

Sebille will request that you let her speak to the Elven Scion. The Scion will request Sebille be the new Mother, and take root. You can interject at this point and tell Sebille to refuse, but if you do this, the Elves will attack you. If you agree, she will feel the Mother's heart and obtain the "Rooted" talent, which gives +3 to memory.