The Secrets of the Dwarves | Divinity Original Sin 2 Wiki


The Secrets of the Dwarves / Deathfog Rising is a Quest in Divinity: Original Sin II. It appears that the Voidwoken attacked a dwarven wedding for some reason. Could this be connected to the cache of deathfog known to be in Arx? What's truly happening?

The Secrets of the Dwarves Objectives

The Secrets of the Dwarves Walkthrough

There are multiple ways to acquire this quest, most predominantly if you did the quest with Lohar back in Act II, finding out that there is a cache of Deathfog barrels headed to Arx. Ultimately though, you'll want to get into the wedding site in Arx, so head over there. Note that this quest is closely related to the "Blood Dowry" quest and is recommended to be done in conjunction with it, but they are not the same, though both take place in the same area.

Unfortunately, you won't be allowed into the wedding area. There are also multiple ways to get into the wedding site without triggering combat, with the easiest way simply passing a speech check with the guard at the door to let you in. You can also pass a speech check with a drunken dwarven woman outside the building (at around co-ordinates X:322, Y:299) to get her invitation so the guard will let you in, or you pick the door next to the wolf carriage, or you can sneak through the backyard of the loremaster house, and into the wedding area as shown in the picture below: 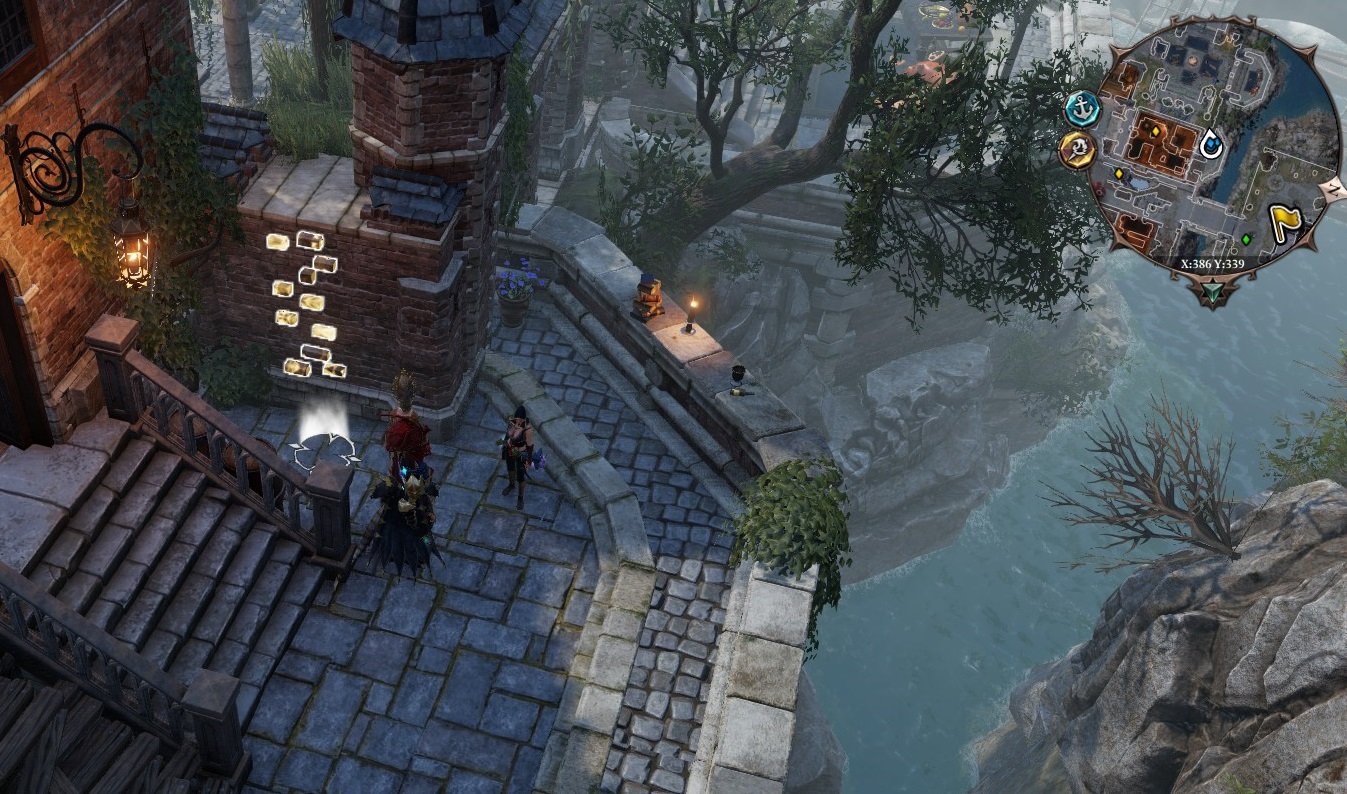 Alternatively, if you can't jump over the walls, you can also get in there through the sewers, as shown in the picture below, but be very careful of the fog-swollen spiders, since when they are killed their corpse will exude a small deathfog, killing all living beings in it. You will end up in Micheil Ros cellar. This is arguably the most tedious option. 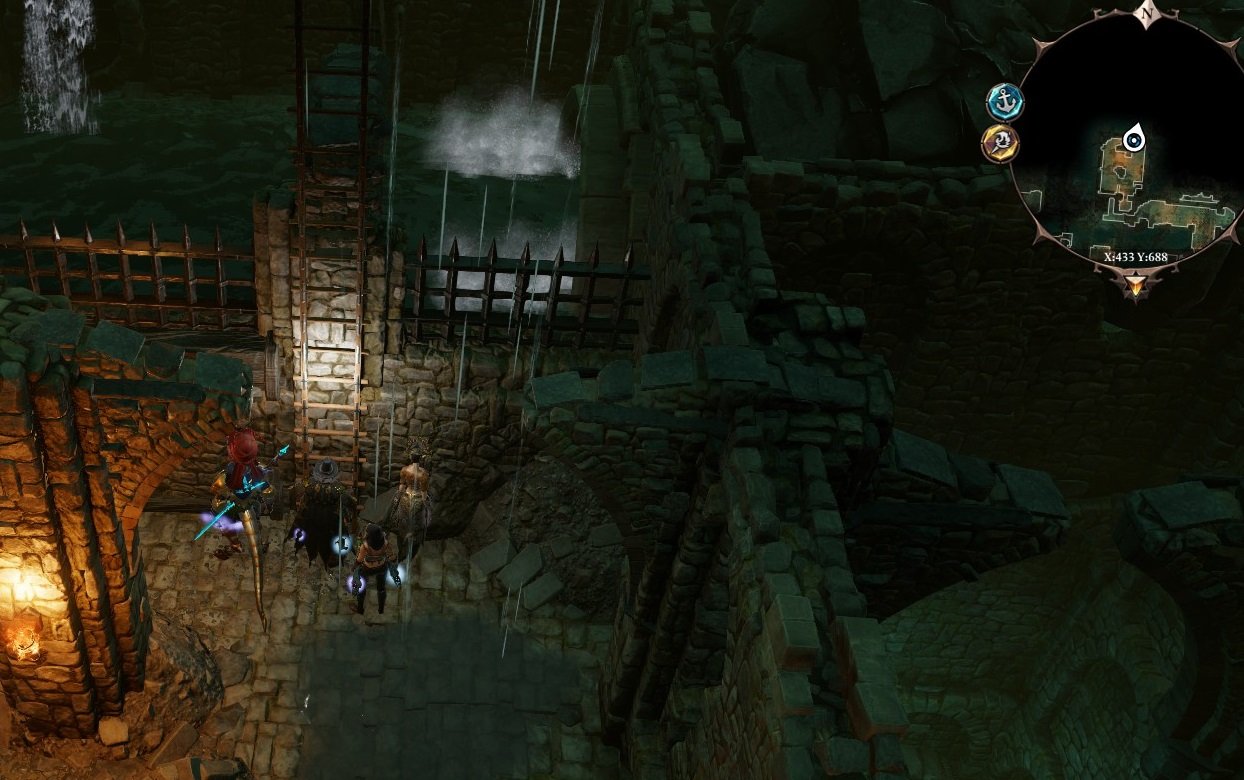 Ultimately, simply enter the wedding site, and you'll find many dead bodies. You can interact with the statue at this point and pass a wits speech check to find out that there is death fog underground. You can cast Spirit Vision here and see the spirits of the guests, but they will yield no real information and are just source food. You can speak to the dwarves here for more information, but this is optional.

Interact with the huge wedding cake in the center, and it will cause an explosion, and some wind-up toys will appear and attack. After you killed them, a guard will hurry in due to the commotion and you can take this opportunity to ask him where the cake came from. He will tell you that a man known as the Doctor sent in the cake. This Doctor is the very same one afflicting Lohse in her personal quest.

Now you'll have to enter the sewer, then head to Queen Justinia's court. One location of a sewer entrance is shown in the picture below. If you've solved "Blod Dowry" in Micheil Ros' favor and promise to talk to Queen Justinia he will allow you to enter the lower level of the sewers directly through is cellar. He will also hand you a key. 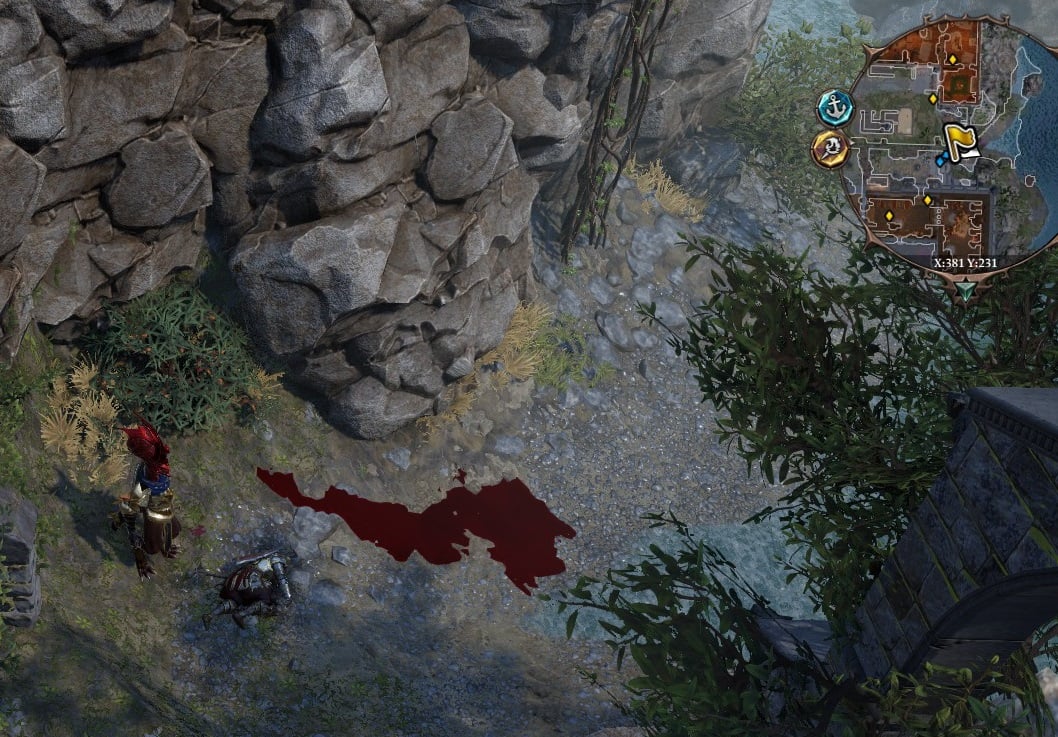 As you traverse the sewers, be very careful of the various traps lurking about. In the picture below, you can either lockpick the suspicious hole in the wall, or use the sewer key from Micheil Ros or the one found near the web area in the sewers. An Iron door blocks the way to the west to the lab. One of the preasure plates at the other end of the room opens the door. You can also teleport or fly a member around and hit the lever. Head inside and down the stairs into the lab. 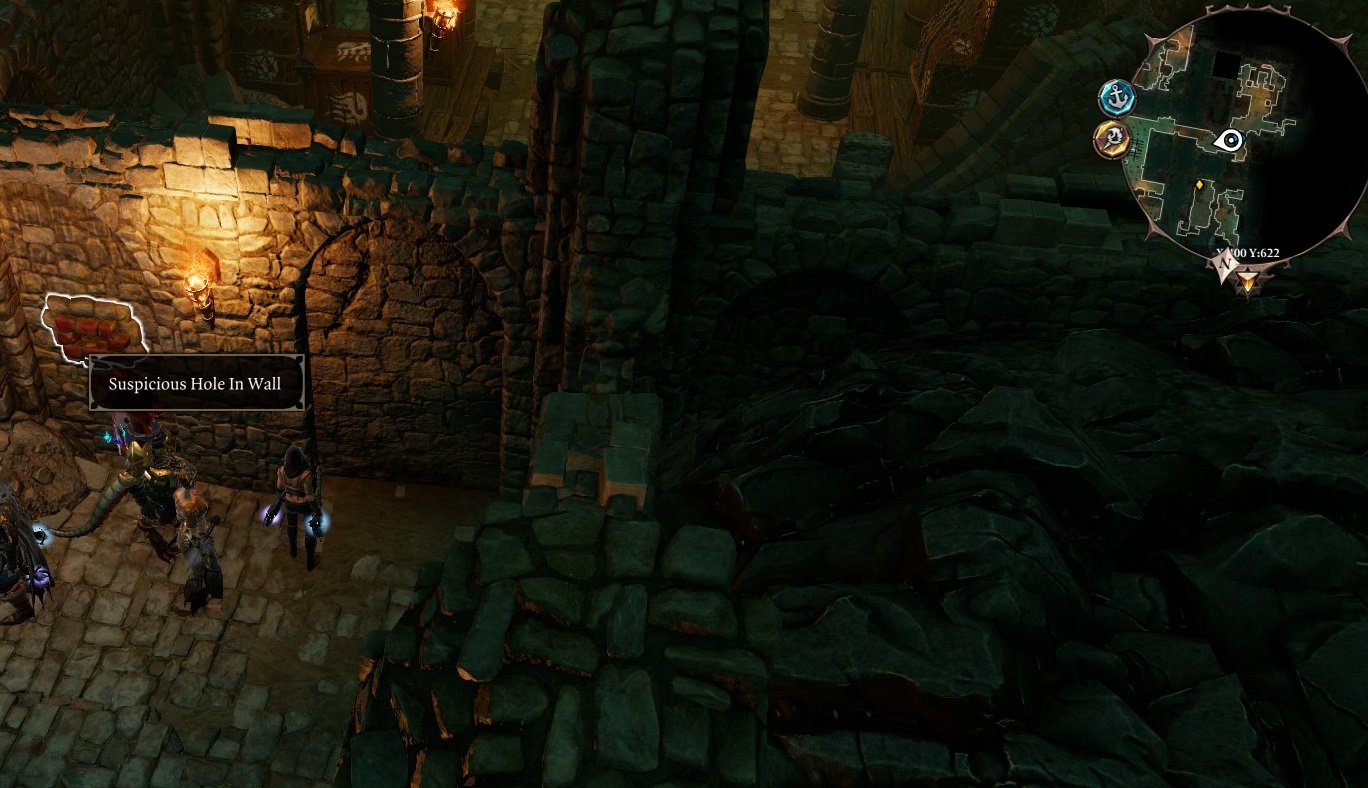 You will come to Queen Justinia's court. Here, although initially her advisor Isbeil will praise your past accomplishments, she will eventually reveal herself to be an enemy, and you'll realize that the Queen has been manipulated by her advisor all along. Regardless of the options you pick or whether you pass the various speech check options, the outcome will be the same: Isbeil will cast a powerful spell, stunning everyone, and you'll wake up some time later in her laboratory.

In her lab, she will rouse you from your coma and reveal her true undead self, before subjecting you to a series of tortures (though interestingly, if you are undead, the tortures heal you and wouldn't kill you anyway and thus don't make much sense). After a while though, before the final deathfog experiment can happen, you will finally be able to break free of Isbeil's spell, and combat will ensue. Destroy her and her Black Ring followers. A well placed thunderstorm here will melt all your enemies and stun them constantly, giving you a huge advantage. In any case, each Black Ring follower is worth 107,800 XP (53,900 XP DE Edition) each (there are 4), while Isbeil herself is worth 149,850 XP (74,925 XP DE Edition). Killing her will immediately update the quest, giving you yet another 134,750XP (no XP DE Edition). The resulting grand total for killing them all is thus a whopping 715,800 XP.

After the battle is done, cast Spirit Vision and you can talk to Isbeil's spirit and learn the truth behind her fury and motivations for unleashing deathfog upon the magisters and paladins. There is a doomsday device near her, which you can use to unleash deathfog upon Arx. The results are that, obviously, everyone will die. Arx will become a complete ghost town if you do this, and render many quests uncompletable, if you have not already done them. You can still walk through some areas though, as the roads are not filled with deathfog. This walkthrough will continue on, assuming you did not choose to unleash the deathfog upon Arx.

Note: as of patch v3.0.158.595, Destroying Arx by releasing Deathfog will now make the player fail the Path of Blood 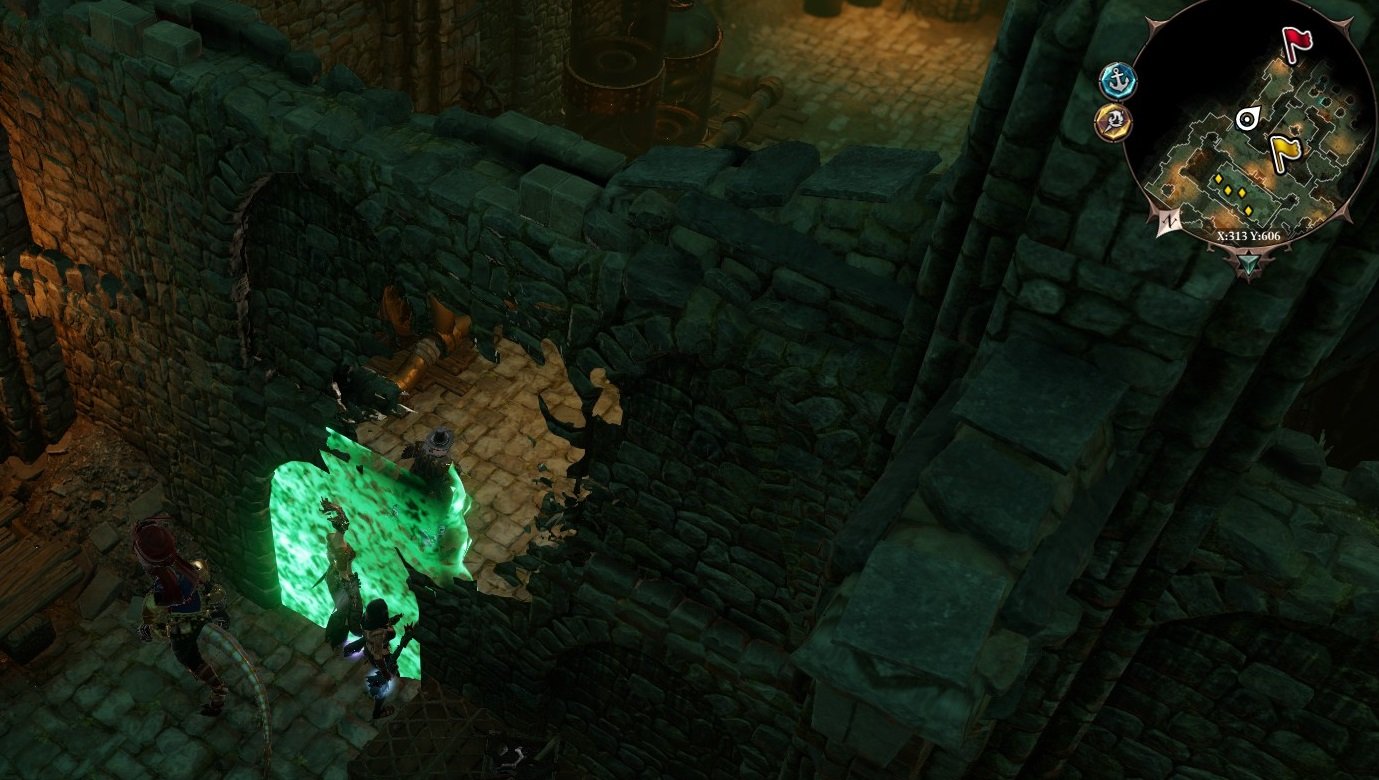 Once you enter through the door, you'll hear a loud crash, and Queen Justinia will come crashing in, demanding to know where Isbeil is. Simply tell her Isbeil is dead, and you can decide her fate. If you decide to kill her, she will attack you. She is worth 149,850XP (74,925 XP DE Edition), and the quest is complete when she dies. If you choose not to kill her, she will leave and you will earn a choice of Legendary-quality loot as a reward. You will not earn any XP though, but the quest is complete all the same.

Don't forget to explore the area, loot Isbeil's research notes, and read it for "The Missing Prisoners" quest.