Combat in Divinity: Original Sin 2 is turn-based, much like classic RPGs. The game has a strong focus on systematic gameplay, encouraging players to make strategic decisions. With the aid of your party and friendly NPCs, you will engage in battle with evil enemies; with just the right amount of luck and planning, you will emerge victorious.

Combat begins as soon as you get close enough to enemies to be noticed or when you actively engage an enemy. When your party is split up and one character picks a fight, the game will only be in turn-based mode for that character. The other party members can still walk around freely, start their own fights, or even join that character while combat is in progress.

While in combat, DOS:2 players have to focus on their environment as it is dynamic. Players can light oil slicks on fire, electrocute enemies standing in water, cast fire on water surfaces to make steam and reduce enemy's visibility etc. These Environmental Effects can cause various Status Effects such as Burns, Poison, Frost etc. which can further limit or enhance the player's combat ability.

A new element to combat in Divinity Original Sin 2 is height or elevation. This new feature means that your elevation plays a big role in how you strategize your fighting. Players on higher ground have greater range & visibility. They also sometimes get added bonus damage to enemies on lower ground.  In combat, you will see a yellow circle around your character, showing his/her normal range for attacks. If standing on higher ground, there will be an additional green circle extending a few meters extra. This is your added range due to height advantage. If you hover over enemies with your mouse, you can even see the potential damage boost you get from being at a height. 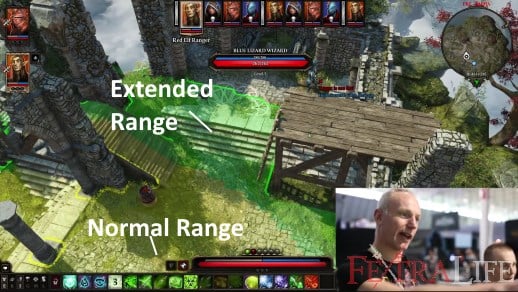