Blood Dowry is a Quest in Divinity: Original Sin II. There seems to be an unhappy wedding between the bride and the groom. Will you uncover the truth?

You can obtain and do this quest multiple ways, but the most complete way will be listed here. Simply start this quest by first heading over to Dorian Gall's house (the groom) at around co-ordinates X:416, Y:323, and enter his bedroom. As shown in the picture below, you will need to press the button to reveal that his bed actually hides a hidden hatch to his laboratory.

Enter his laboratory, and you'll immediately find that it is full of oil barrels, waiting to explode, and that the hatch above you is blocked. To unblock the hatch, you will need to press the button on the southwest side, next to the piled up crates and a bunch of secured ones. The fire damage taken from the resulting explosion shouldn't pose much of a threat, at high levels. In any case, head on in and you will eventually come to a bunch of poison traps and failed experiment slimes. Defeat them all and head deeper in, but don't forget to loot the unique helm here. You will come to Dorian Gall's bedroom, and you can read his diary to realize that he is planning on killing his wife's father for inheritance.  Note: in the definitive edition, the diary is on a table in the house's main bedroom, not the bedroom in the laboratory.

Now head on over to Micheil Ros' house, near the wedding site. If you have not already persuaded them already, you can pass a speech check with the guards to let you in, or pass a speech check with the drunken dwarven woman outside to give you an invitation that will let you in. In any case, once inside, Micheil Ros, the father of Isla, the bride, is on the upper floor. Speaking to him will yield some information about the deathfog barrels in the quest, "The Secrets of the Dwarves". It is recommended to do this quest in conjunction with it since both take place at around the same area.

For this quest, though, you'll want to first speak with Dorian Gall in the balcony as shown in the picture below and tell him that you know about his plan to "hasten" his wife's inheritance. Note that you can also speak to Isla at this point and tell her that her husband's marrying her for money, but she will refuse to believe you. 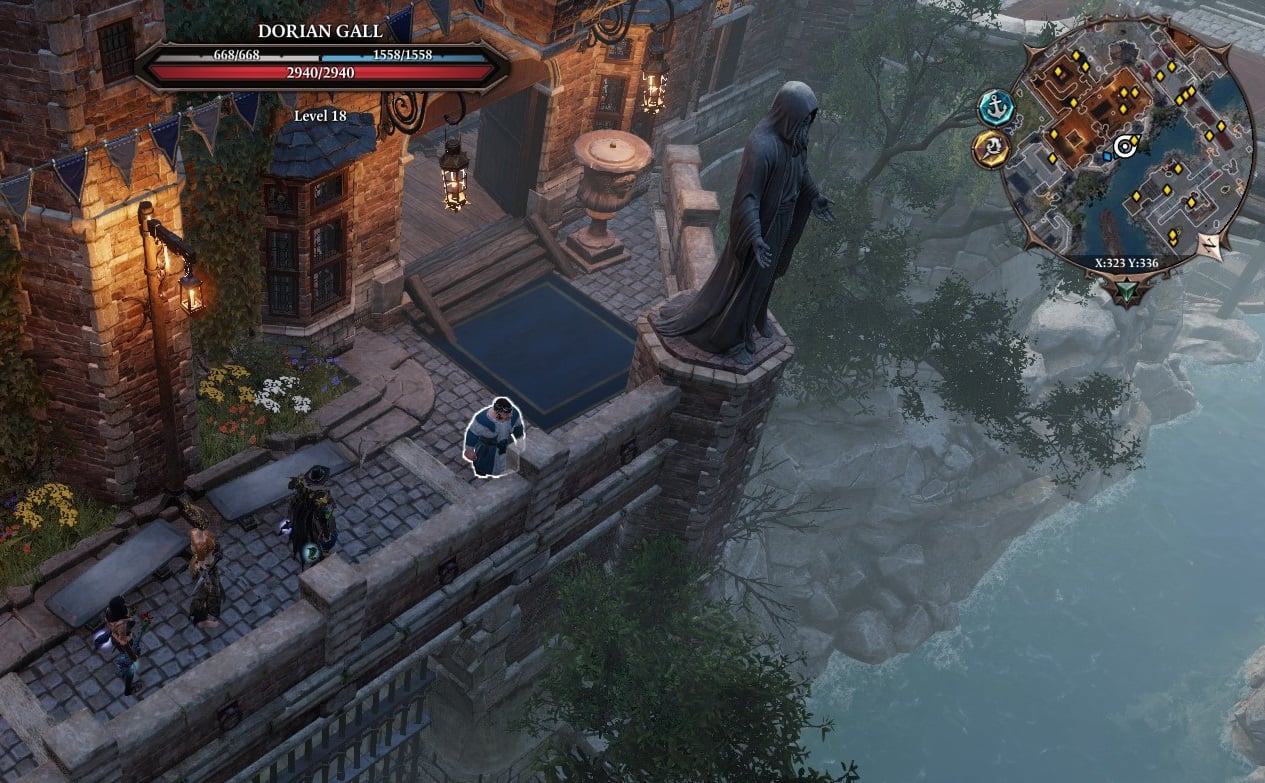 Pass a speech check with Dorian Gall, telling him that you want to help him. If you are rude, he will not give you the contract to kill Micheil, so make sure not to pick the overly rude options. If you pass the speech check, he will then ask what kind of reward you want, and you'll earn 19,400XP. The choices here don't matter, as you'll see why later on. Note that you will want to steal as much as you can from him first before proceeding, as he will disappear later.

In any case, the choices and rewards diverge based on whether you kill Micheil or not, so we'll start first with the killing Micheil Ros path.