A Taste of Freedom is a Quest in Divinity: Original Sin II.

You find a tortured Lich hungry to feed after being drained of his Source for a long time by Mordus. Will you help him or kill him?

A Taste of Freedom Objectives

A Taste of Freedom Walkthrough

After you speak with Lohar and start the quest Shadow over Driftwood, he will give you permission to enter Mordus' basement. Speak to the female dwarf sitting on the hatch and let her know Lohar sent you. She will step aside and send you below. See Shadow over Driftwood for info on the two trapped dwarves and that room.

Now that you are beneath Mordus' house, in the northern section of this room above the beer barrels an ornate skull hidden on the wall can be found which leads to a secret passage. Look at your minimap, you will notice a path that's visible on the minimap but not in the world. You may need 18 Wits to spot it if you're having trouble finding it. Not to be confused with the Bust statue in the room with the two dwarves.

The skull can be lockpicked with Thievery 5 which gives the Infiltration Achievement! However, it's advised to go to Wrecker's Cave and progress Shadow over Driftwood for the Glowing Eye gem by killing Mordus to find an Amulet on his corpse which is then used to unlock a magically protected lock in Mordus' private quarters section near the Ship Wreck entrance side. Inside the hatch behind the protected lock is a dead dwarf on an altar who has a Velvety Pouch that contains the Glowing Eye. This is the gem needed to open the secret passage under Mordus' house in Driftwood.

Hint: If you're having trouble lockpicking the Ornate skull for the achievement, there's a female dwarf named Dashing June who will try to con you out of some gold near the market in Driftwood. If you didn't have high enough Wits to catch her scheme and tell her about her true love Butter then you can pickpocket the "Fancy Gloves" from her in the Undertavern which give +2 Thievery. You may be able to buy them from her too. Papa Thrash in the Black Bull Tavern may have a chest piece with +1 Thievery for sale as well.

Caution: Be sure to unlock the magically protected hatch inside Wrecker's Cave with Mordus' Amulet before returning to Lohar. He will take the amulet from you and you'll have to pickpocket him to get it back. If you did return to Lohar first then you'll need to use three of your characters to talk and face some of the people away in the room. For me Marla (the traitor on her knees) was still not letting me pickpocket Lohar so I killed her in front of everyone and no one attacked me. She gave 4,000xp and isn't connected to any quests that I've found. An invisibility potion may help here as well.

Once you get past the ornate skull, you will find a locked door and a pressure plate puzzle. Facing the door, cast Spirit Vision to see the correct pattern. A series of symbols will appear.

*Hint: A total of five plates must be pressed which will require you to get creative with an item or one of the vases in the room.

(To avoid spoiling the fun, the solution has been placed at the bottom of this page.)

After activating the correct plates, the door will permanently open.

But which switch is it?

Caution: If you explore the room before talking with the Lich, you have a high chance of accidentally releasing the hidden skeletons in the urns which reduces the reward and lore.
So, before exploring the room head straight to the middle and speak to the Lich. You will learn that Mordus has kept him here for a long time draining him of source. This also prompts a conversation regarding the Lich's release.

The chest on the left can be unlocked afterwards with the Acid Stained Key that's also in the room.

After pressing the Green button and an unconventional team up with the Lich he will offer you a skillbook from a category of your choice. (Tested the choices out 3 times and I picked Huntsman twice and got Marksman's Fang both times, Necromancy choice gave Shackles of Pain). If you attempt to ask the Lich to teach you about Source, he will pout and give you a random skillbook instead.

(Other answers will probably give a random book from the ones listed, but we kept getting Shackles of Pain. Admittedly low sample size for any skill other than that one.)

To Feed or Not to Feed?

Back in Driftwood, if you hadn't already fought the Magister guards and their Source Hounds by the Western gate then you'll discover them dead with Poison around as evidence to the beginning of the Lich's killing spree.

You will encounter the Lich again in Cloisterwoods (at the bottom blue flag shown in the map below X:224 Y:192). This time you will see him feasting on the remains of innocent dwarves, unable to satiate his hunger for Source and sinew. 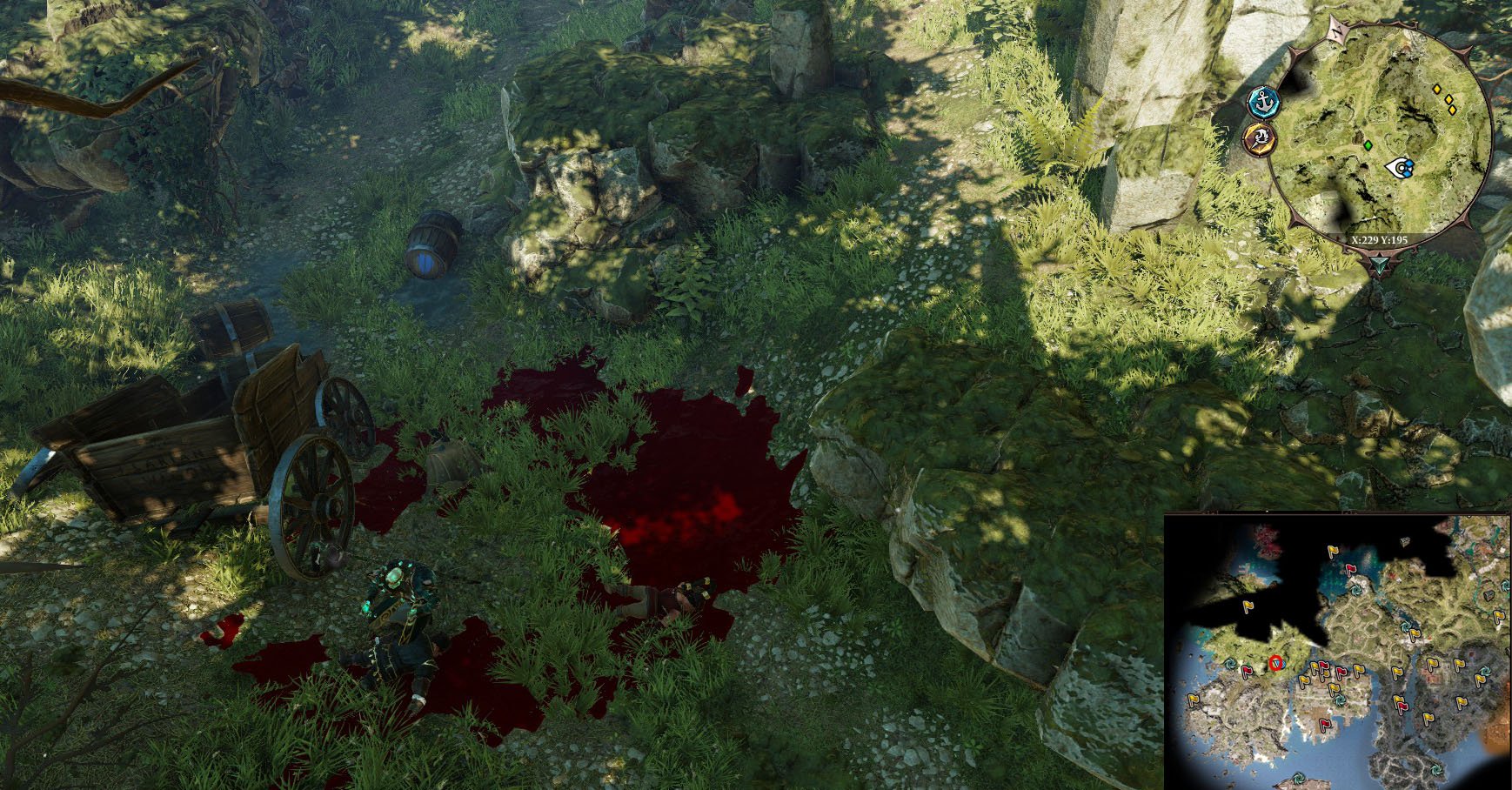 Now this next part has a couple different outcomes and may be a good saving point.

Option 1: (Must speak with him with a character that has a Source Point) Offer him one of your Source to save an innocent life in the future. Afterwards, he will request your presence at a nearby reliquary to retrieve his Soul Jar then teleport away and reward some quest progression xp. (You gain 4175 exp)

Option 2: Attack him. This will however, get an innocent child from Driftwood killed (who has some lockpicks and trap disarming kits on his corpse). On his first turn he will cast Bonedance and raise the three dwarves into undead and force them to fight with him. The undead dwarves give 7,500xp for two of them and curiously enough only 3,750 from the third. Defeating the Lich gives no XP because he doesn't die but is knocked out of the fight for more dialog afterwards. You can Spare him or Kill him here but it's recommended to Spare him for additional loot after the third encounter.

Note: If the Lich left after the first encounter because you ignored him, you will not be able to offer your own Source for him to feed on.

At this point, the available dialogue choices will vary based on your actions thus far, but they will all end the same way. You will meet him again for a third and final encounter, at the entrance to the ruins. (Shown as a blue flag at the top right of the map above X: 260 Y: 255.)

Note: Another strong suggestion to Save before you speak to him at the reliquary as you will likely be interested in fighting him after the quest for extra loot and he quickly teleports away.

If you did not sacrifice your Source to him, he will be feeding on the young child mentioned before and you will have to decide between letting him continue his ritual for the Soul Jar or stopping this and killing him.

If you sacrificed your Source to him, he will be waiting at the altar without the dead child and he will ask for some of your blood to complete the ritual (this is safe; he only takes a small portion of your Vitality). You will have to pick a party member who isn't undead in order to give him your blood. 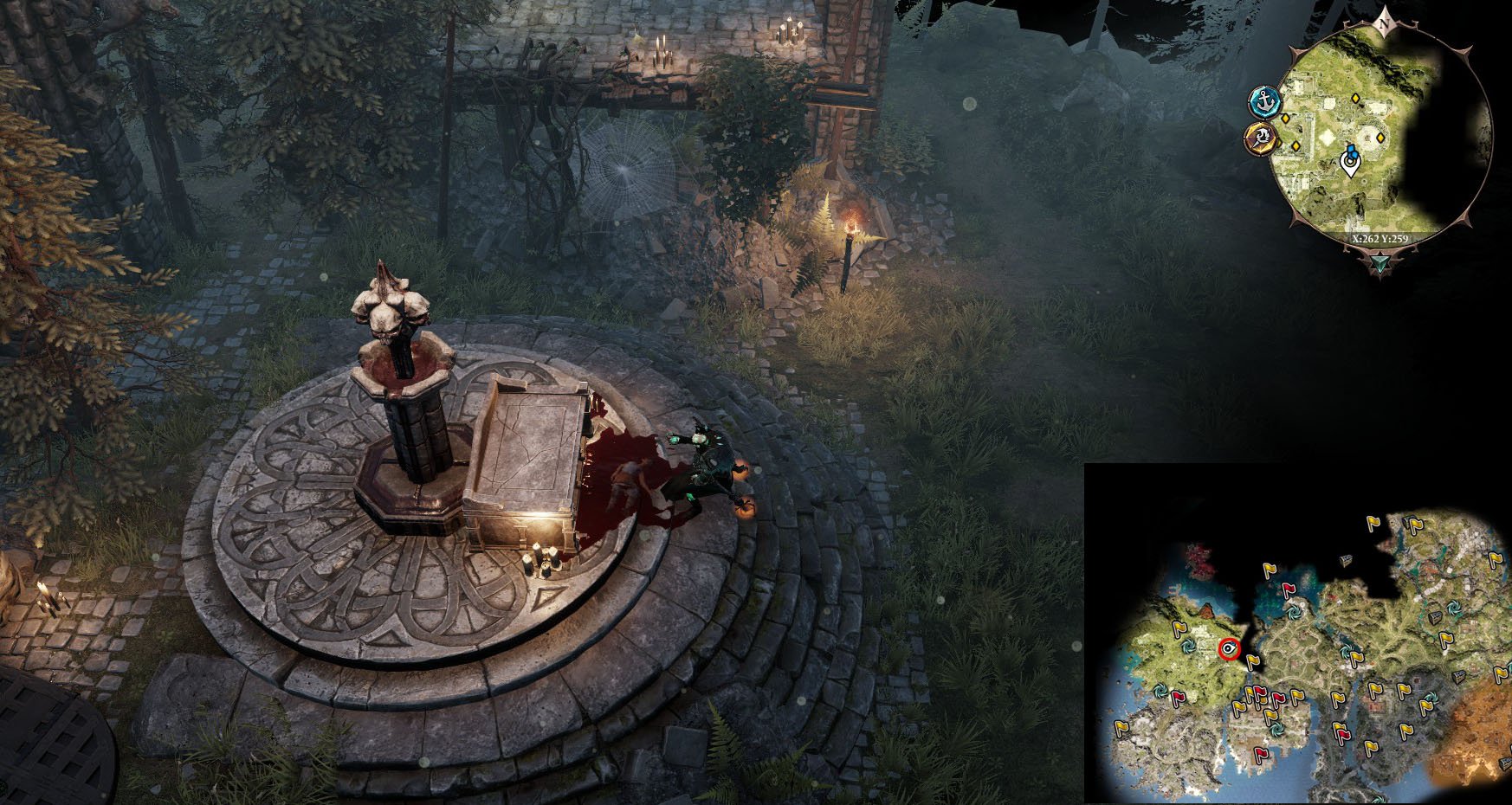 After allowing him to continue, he will cast his incantation using your blood or the blood of the child to reveal a cache with his true name on it. Then will say "I am me. I am whole. I am Xhaxh!"  You will receive 4,175xp and the quest will close at this point. However...

If you attack him right after he spawns the chest as he's speaking his true name, he will spawn four Parasitic Hearts to help him this time around. In order to initiate combat here, you must cast a spell on him or some other hostile attack action right after he spawns the cache -- there will be no further dialog or opportunity to attack him, because he teleports away after the cutscene. Killing him is the utmost priority in this battle since the Parasitic Hearts deal relatively low damage compared to him. This time, you will kill him off for good "xxxhhhnnNNOOO! I was so CLOSE...!" and obtain 14,975xp for killing him and an additional 3,750 per Parasitic Heart. You will also get the unique Necromancer staff called the "Xhaxh's Staff of Parasitic Decay" as well as his Phylactery and other powerful trinkets for your troubles.

Additional Outcome / Strategy: If you attack him before he picks up his Soul Jar then combat starts with him Cursing you but the 5 Hp Soul Jar can be destroyed with any attack or skill from a secondary character while he still talks. This will kill him instantly.

Fun Feature: Once you have his Phylactery you can Right-Click and Use it. This will place it on the ground and prompt a dialog. You can decide to Absorb Xhaxh's Source which will restore 1 Source Point or crush it under your boot for nothing. Interacting with it one way or another does not reward any xp. Weighs 3lbs and sells for 120g. Basically an emergency Source Point.

As promised, the picture for the frustrating pressure plate puzzle! 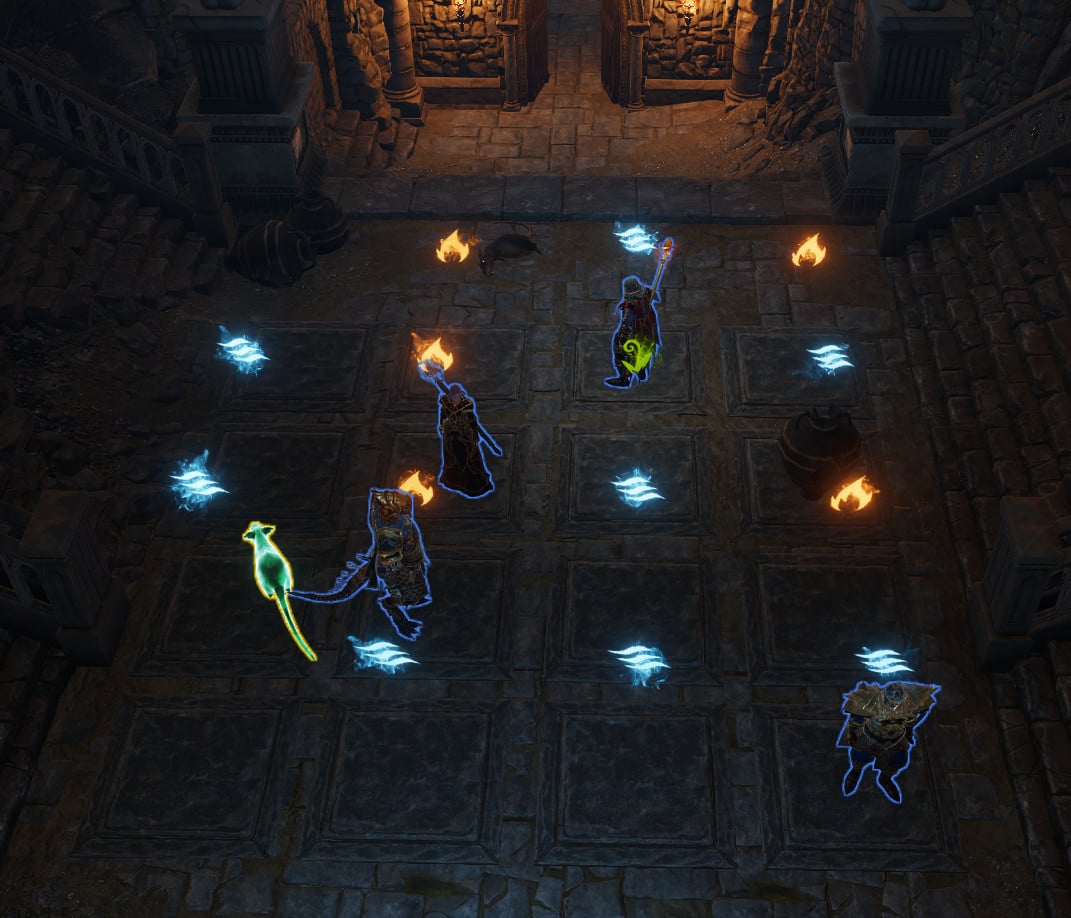